Review: Love You Like That by Scarlett Cole (Excess All Areas #4) 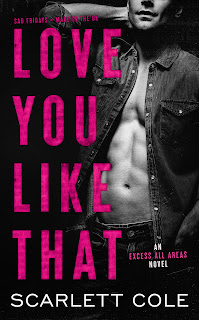 If you're familiar with the Excess All Areas series, then you know that Nan is truly a wise woman. The quote above is from her, and I love how much she loves her boys, aka the guys who make up Sad Fridays. She's one of the countless reasons why I'm so darn smitten with this series. I've so enjoyed seeing Sad Fridays finally getting the recognition their music deserves and each member--brothers Matt and Jase Palmer, their cousins, Alex and Ben King, and Matt's best friend, Luke Bryson--finding love. Love You Like That is the fourth and penultimate novel in the series and features the band's twenty-eight-year-old percussionist, Alex King. He's paired with Zoe Atkins, a gifted percussionist whose pursuit of music came to a screeching halt as her hearing loss worsened. He's known for his musicality as much as for his pansexuality and lack of desire for a relationship. So, when he makes a bet with Zoe and offers to be her wingman, it's quite evident that Alex isn't the least bit interested in being anything more than a friend. Right?
Where do I even begin with this book?! Alex and Zoe were such an intriguing couple, and I appreciated their representation--he's pansexual and she's deaf--in the story. Neither main character is made to evoke sympathy; Alex's sexuality and Zoe's deafness are part of who they are, but it isn't all they are. Their friendship was something I also loved because you can see the foundation of everything else to come between them have a sturdy footing to build upon. I enjoyed their interactions with the rest of the series's cast of characters--from Matt and Iz, Jase and Cerys, Luke and Willow, and Ben and Chaya (who are the only non-couple in the series...so far) to Nan (who deserves that solo spot because she is totes awesome)--and adoring the larger family they've become. This was a lovely slow-burn read, one that had me wholly engrossed from start to finish. It's almost as if Scarlett Cole's taken a piece of my heart with each new book from the Excess All Areas series, and now, there's only ONE left to go! Gah! Five-plus stars go to Love You Like That.
Release Date: 17 May 2022
Date Read: 13 May 2022
Learn more about Scarlett Cole.
Purchase Love You Like That on Amazon | Apple Books | B&N | Kobo.