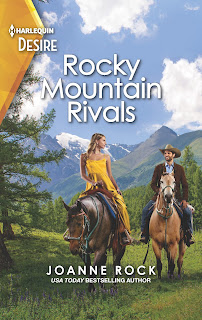 Note: An advance reader copy (ARC) was provided by Harlequin Desire via Give Me Books Promotions.
It's been a while since I last read something from Joanne Rock, and I'm happy that I'm getting a reintroduction to her writing via a new series starter. Rocky Mountain Rivals is an enemies-to-lovers romance and it officially kicks off Rock's Return to Catamount series. Published by Harlequin's Desire imprint, the books are set in the Catamount area of Colorado and centers on the Barclay sisters--Lark, Jessamyn, and Fleur--who were pulled in different directions due to acrimonious divorce of their parents. Book one features the youngest Barclay, twenty-five-year-old Fleur, who has returned to Catamount to handle Crooked Elm, the ranch left to her and her sisters by their late grandmother. Thirty-two-year-old Drake Alexander has his sights set on buying that neighboring property, but things are already complicated even before negotiations have begun. Fleur is his younger brother's ex. Add to that long-held secrets and an even older awareness that's begging to be explored and Drake and Fleur could end up risking more than their families' legacies.
I loved the fast-paced storytelling in this first in a series, and the tension between the main characters made for some enticing moments. There was a degree of animosity mixed in with the attraction simmering between Fleur and Drake. The fact that Fleur was once engaged to Colin, Drake's brother, gave this a touch of the forbidden, but of course, there was more to that particular part of the story. Aside from the romance, there's family drama on both sides, what with Drake's estrangement from Colin and Fleur's own with her father. While things do end happily for Fleur and Drake, unresolved issues remain when it comes to Crooked Elm, and I'm curious to see how that will play out over the next two books, One Colorado Night (Jessamyn's story) and A Colorado Claim (Lark's story). For now, though, I'm happily satisfied with Rocky Mountain Rivals, which receives four stars.
Release Date: 31 May 2022
Date Read: 29 May 2022
Learn more about Joanne Rock.
Pre-order Rocky Mountain Rivals on Harlequin | Amazon | Apple Books | B&N | Kobo.