Review: Unwanted by Marley Valentine (The Unlucky Ones #1) 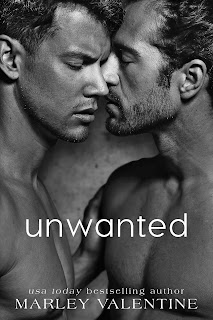 Note: An advance reader copy (ARC) was provided by the author via Grey's Promotions.
It goes without saying that every upcoming Marley Valentine release becomes a most anticipated read. That's the way it's been ever since I discovered this author's writing in Devilry, which is part of the King University trilogy in 2019. I've yet to read her work prior to that novel, but believe me when I tell you that those books are on my to-be-read list. But what I want to talk about is Valentine's newest one, and it just happens to be the first in her new series, The Unlucky Ones, which also becomes the first series that she's written on her own that I'm actually getting to read as each book is released (as compared to her other solo series which are all backlisted). Suffice it to say that my expectations were high going into Unwanted, and doing that can oftentimes be rather unfair. but this author has proven her worth to me all the times I've read her work, meaning she sets the bar loftily.
The Unlucky Ones is a series of four books focused on a set of five foster siblings--two of whom are actually blood-related--who have become each other's found family: Arlo (27), Frankie (26), Clem (24), Lennox (22 and Frankie's biological brother), and Remy (20). The series kicks off with Unwanted, with Arlo Bishop and Frankie York as the main characters. Theirs is a story of redemption, absolution, and reconciliation inasmuch as it is also about family, love, friendship, and home. Readers are introduced to them just as Frankie is left with no other option but to leave Arlo with a fighting chance to get a handle on his addiction, even if it means breaking both their hearts in the process. Four years later, Frankie returns to LA from Seattle after a distressing phone call. Now, he and Arlo are no longer unwanted foster kids; they are men longing for what--who--they want.
The angst is strong in this one, and you won't hear me complaining one little bit. The angst is warranted, especially given the back story of not just the main characters but that of the entire recurring cast of characters as well. My heart hurt for both Frankie and Arlo, and I empathized with the thoughts and emotions they were struggling with from four years back and the present. I appreciated that Marley Valentine didn't gloss over Arlo's addiction and reiterated that it is a continuing struggle for both the addict and those who love and support them. The coming together of the foster siblings as well as Frankie and Arlo rekindling their romantic relationship were my favorite things about this book. While it did feel like it was missing a bit of oomph, Valentine's way with words and Frankie and Arlo's tale of love and fortitude inspire me to award Unwanted 4.5 stars.
Release Date: 21 May 2022
Date Read: 18 May 2022
Learn more about Marley Valentine.
Purchase Unwanted on Amazon.