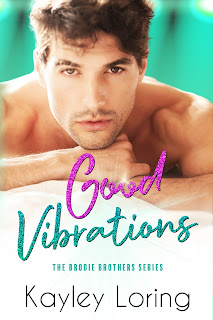 My daughter will always be the star of the shitshow that is my heart, but Aria has had a firm grip on my balls for three long years and she's never even touched them.

I know we're told that we should never play favorites, but I unabashedly DO play favorites and I have no shame in declaring that Miles is my favorite Brodie brother! (Sorry, Owen and Dylan!) Good Vibrations is the third and final (waaah!) novel in Kayley Loring's Brodie Brothers series, and the grumpiest (and oldest) among the three brothers finally gets his happily-ever-after with a certain former Disney star. No, I'm not talking about anyone from That's So Wizard. This thirty-two-year-old lawyer and single father shares his story with Aria Cross, twenty-five who retired as an actress and singer but maintains a love affair with music, writing, and directing. Three years ago, they met on the sandy shores of Zuma Beach and Miles was smitten. Unfortunately, he soon realizes that Aria is the ex-girlfriend of an up and coming director who just happens to be his client. Crossing that line would be disastrous. So, he keeps his distance from the beguiling woman...until the opportunity to help his eight-year-old daughter, Macy, land the starring role in a musical Aria has created and is directing. The problem? Macy is a wee bit vocally challenged. And there's that pesky attraction thing between Miles and Aria he's been desperately trying to ignore for the past three, long years.
Oh, Miles, Miles, Miles... I need to give the guy credit because THREE YEARS of pretending not to be pining for Aria makes me want to nominate him for sainthood. He may have been the poster child for grumpiness, but I'd like to think that part of it had to do with not being able to pursue his feelings Aria for so long. Maybe it was foreplay...that last three years. But still there was this slow burn feel to their romance, which I so adored. The thing is, she was exactly what he needed in his life, like the perfect counterbalance, and I think she was also able to provide some valuable insight on how best to manage Macy's performance issues instead of wearing noise-cancelling headphones or putting her on mute or pretending she's the next Julie Andrews or Lady Gaga or *insert your personal pick for amazing female performer here*. It's like helping Macy go from astounding (and not necessarily in a good way) to outstanding (in the best way possible). And let's not forget the rest of the Brodie bunch--from Pops and Mama Brodie (who seriously need their own book!) to Owen (plus Frankie) and Dylan (plus Scarlett)--who added to the heart and humor. I honestly couldn't name you one thing I didn't love about this book. To paraphrase the Cheshire Cat: We're all mad here. I'm mad(ly in love with these Brodies and the loves of their lives!) here. Good Vibrations gave me five-plus-starred good vibes.
-------------------------
Read my reviews for the Brodie Brothers series: