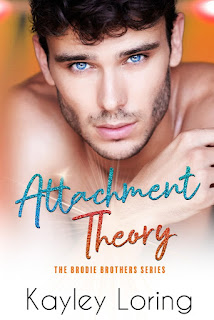 Note: An advance reader copy (ARC) was provided by the author.
It's confirmed. I've formed an attachment to Kayley Loring and her writing. Ten books in and that attachment shows no signs of abatement. Or maybe it's more of an addiction. Either way, her books, whether they be eBooks or audiobooks, have brought a lot of levity and joy in my life, and every single time a new book is announced, I'm on it like...well, me on bacon. But back to Loring's fabulously wonderful romantic comedies... Her newest release is the second book in her Brodie Brothers series, and this time around, we've got the youngest of the three--Dylan Brodie. He's paired up with a single mother who also happens to be a therapist, Scarlett Shephard. Attachment Theory is a standalone, although the rest of the Brodie brood pops in, as do certain characters from the author's previous series, Name in Lights. So yeah, go read them anyway.
At twenty-four (and a half), Dylan Brodie was an actor and model who had achieved quite a bit of success for himself. But while he was doing well career-wise, his personal life wasn't really all that great. He had a bad habit of falling for his co-stars. Very Hollywood cliché, if you would. When he meets Scarlett Shephard during a trip to a natural foods grocery at Erewhon, he's smitten by the thirty-year-old single mother. Nothing comes from his efforts to quickly woo her, and so they go their separate ways. It isn't until three years later when their paths intersect. He's twenty-seven, but still very much in the entertainment business; she's thirty-three, and still very much a single mother to her now eight-year-old son, Noah. Oh, and she happens to be a therapist--Dylan's new therapist, to be exact. She's still not into dating actors (thanks for that, ex-husband!) nor is she thrilled about the age gap. But Dylan is a temptation Scarlett may not be able to resist...
ATTACHED AND ADDICTED!!! Yep, I'm owning it. I am absolutely, unequivocally, undeniably attached and addicted to Kayley Loring's rom-coms. I adored Dylan and Scarlett's romance, and I appreciated the fact that Loring chose to not have this winsome twosome take the oft-traveled road of other fictional couples who happen to have a medical professional-patient relationship? These two made me smile and laugh, and I feel like I say that every time I post a review regarding my latest rom-com read or listen from Loring, but what can I do if it's true?! As always, there's an awesome supporting cast of characters here. Dylan's family is as kooky but lovingly supportive as every, even if they do like making fun of Dylan in their own separate message thread and tease him mercilessly over that cologne commercial of his. Scarlett's got her adorable son, Noah, who may or may not be a wee bit obsessed over farts, her parents, and her close-knit circle of friends. Reading this book was such a highlight of my week, particularly because it's been a rather stressful one (totally blaming Mercury in retrograde), so thank you Brodie brood, et al. Attachment Theory gets five stars.
-------------------------
Read my reviews for the Brodie Brothers series: