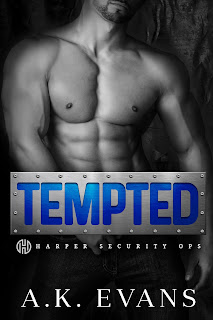 Note: An advance reader copy (ARC) was provided by the author via Give Me Books Promotions.
Tempted is the second novel in the Harper Security Ops romantic suspense series from A.K. Evans. This can be read independently of Broken, the series starter, and features Mallory Grant and Nixon Scott. She works at Grant's Deli, which is a family-owned business, and he works at Harper Security Ops with an expertise in kidnap and ransom. Their paths first cross when Mallory's best friend, who happens to be the former girlfriend of Nixon's brother, Killian, is abducted--all of which plays out in the author's fifth Rock Stars and Romance novel, Terrible Lie--and Nixon and the others at Harper Security rescue her. The attraction between them is undeniable, and the temptation is too much to resist. Even though all Nixon can offer is casual, Mallory decides to take him up on it, hoping her heart doesn't get broken in the process. When her life is put in danger, Nixon realizes that nothing between them was ever just casual. But is it too late for them?
Just like the book before it, I thoroughly enjoyed this next story in the Harper Security Ops series. Not having had the opportunity to read the author's Rock Stars and Romance series, particularly book five, Terrible Lie, I felt I was missing out since the teeny, tiny glimpse I got of Magnolia and Killian's story piqued my interest. Having said that, I did like both the romance and suspense aspects of Mallory and Nixon's story. Figuring out the who and the why with as much as the threats against Mallory's safety wasn't too difficult, but I appreciated that it wasn't someone who just popped up out of the blue and for the silliest of reasons. I also loved seeing how everyone who was part of Harper Security felt like family, so I'm eager to read more about those who have yet to get their own happily-ever-afters. I'm giving Tempted 4.5 stars and can't wait for book three!
Release Date: 24 May 2022
Date Read: 20 May 2022
Learn more about A.K. Evans.
Pre-order Tempted on Amazon | Apple Books | B&N | Kobo.