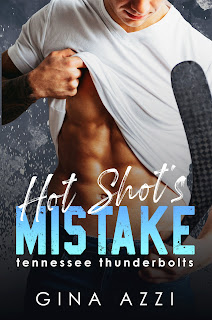 Note: An advance reader copy (ARC) was provided by the author via Give Me Books Promotions.
Hot Shot's Mistake is the first book in Gina Azzi's Tennessee Thunderbolts series, which is a spin-off of her Boston Hawks Hockey series. If you're familiar with the aforementioned series, you may recall that certain former players for the Boston Hawks came together to buy the Tennessee Thunderbolts, aka the Bolts. In this new series starter, the Bolts are basically gettiing reorganized, what with new owners, new management, and a new set of players. You don't necessarily need to read the original series in order to read this one.
Book one is about Devon Hardt, twenty-eight and newly traded by New York to Tennessee. He isn't too thrilled with the move, but at this point, he doesn't have that much of a choice. All he wants to do now is prove to everyone that he can bounce back from his injury and head back to New York as soon as possible. But his new physical therapist is turning out to be a game changer. Mila Lewis isn't easily taken by his good looks or hockey prowess. She knows all too well the pitfalls of being with a professional athlete. They don't get off to the greatest of starts, but over time, things change for them. But what future could they ever have when Devon intends to leave and Mila has no plans to do so?
I wasn't a huge fan of Devon's for the first few chapters in the book, and kudos to Mila for not letting him get to her and knowing when to put him in his place. But the guy certainly won me over once he realized the error of his ways. He truly was someone who had a good heart, and when he finally gave his new city and team a chance, he realized they, in turn, were more than willing to do the same. As for Mila, well, she definitely was a woman after my own heart. She was smart, confident, and stood up for herself. Hot Shot's Mistake was a four-starred start and I look forward to reading the next book in the series.
Release Date: 12 May 2022
Date Read: 06 May 2022
Learn more about Gina Azzi.
Purchase Hot Shot's Mistake on Amazon | Apple Books | B&N | Kobo.