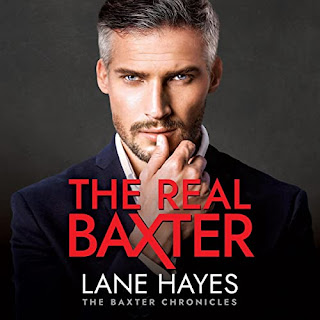 Note: The audiobook was provided by the author via  IndiGo Marketing & Design.
When I read The Real Baxter back in March, I got so much more than I had been hoping for. Calling my expectations "lofty" would be an understatement, but then this was Sebastian Rourke's story we were talking about, and he has been on my wish list for secondary characters to get their own books for what feels like forever. For anyone reading this and isn't familiar with Lane Hayes's writing in general or Seb in particular, he was first introduced in the Starting From series. While his ex-partner--and still best friend--and older son have found true love, Seb hadn't been quite so fortunate during that series run. But now, we've got his story, and it's what kicks off Hayes's The Baxter Chronicles series. If the rest of the books are as fantastic as this one, then dare I say that this series could give my favorite from Hayes, Leaning Into, a proverbial run for its money.
Suffice it to say that Sebastian Rourke is complicated, but then I expected as much. His back story had its heartrending moments, and it was those that shaped him most. He's a good father and a good friend, and there's no denying he's a powerhouse when it comes to work, but the guy was a master at self-sabotage. And then Trent Mackay came along and everything slowly but surely changed for both of them. This story had some angst and some wit alongside age-gap and fake relationship feels. But what wasn't fake was the romance, and it's something that Lane Hayes has done quite well here, adding layers to well-worn tropes, making them feel fresh and original. Add in the always amazing Michael Ferraiuolo, and well, the guy is one of my favorites for good reason. He made what was already a wonderful story even better, and I didn't think that was possible. Five-plus stars for the story, five-plus stars for the narration, so in short, all the stars for The Real Baxter.
Date Listened to: 30 April 2022
Learn more about Lane Hayes.
Learn more about Michael Ferraiuolo.
Purchase The Real Baxter on Audible.