Review: Kiss and Fake Up by Carrie Aarons 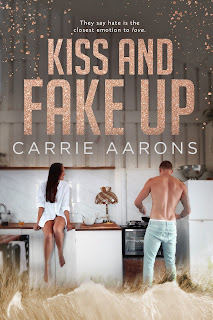 Note: An advance reader copy (ARC) was provided by the author.
Kiss and Fake Up is a companion novel to Carrie Aarons's Love at First Fight, which was released in 2020.  If you've read the previous book and have been hoping for Heather (whose last name I don't recall being mentioned, but if it was, feel free to let me via the comments section!) and Campbell Whitlock's story, well, consider your prayers answered! This is a second-chance romance with some enemies-to-lovers (although more one-sided on Heather's part) and fake relationship feels. Two years and three dates ago, Heather thought she and Campbell had a good thing going, but then for their fourth date, he goes and double books himself, i.e. setting up a date on the same night he was having dinner with her at his newest restaurant. Talk about shutting things down quickly and decisively. He's been trying to apologize ever since, but she's never been receptive any of them. But when her ex-boyfriend turned stalker becomes a clear and present danger, Campbell offers to help her out and Heather finds herself considering it. The help? Being her fake boyfriend.
This was a good read, and it gave Heather and Campbell a satisfying happily-ever-after, especially given how things ended between them a couple of years back. Now, to be fair, Campbell had a point when he said that they hadn't made any promises to be exclusive when the whole double-booking fiasco happened. He did lose a point or two when he gave one particular apology and made it sound as if she was being immature about not accepting it. Men. Sigh. But that isn't too say Campbell wasn't a good guy, because he actually was, and he truly cared for Heather. I appreciated that she was independent and strong-willed, but she also took the whole double-booking thing to a point that it made it uncomfortable not just for Campbell but everyone else around them. Yet Campbell was still protective of her. I liked seeing them get over their issues and finally realize that they were actually amazing as a couple. The story flowed well and the main characters were likable and they clicked, so cheering them on wasn't overly difficult. I'm giving four stars to Kiss and Fake Up.
Release Date: 06 May 2022
Date Read: 03 May 2022
Learn more about Carrie Aarons.
Pre-order Kiss and Fake Up on Amazon.