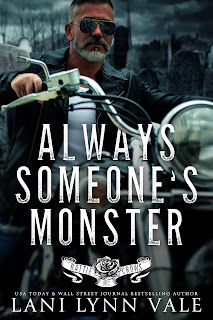 Note: An advance reader copy (ARC) was provided by Uplifting Author Services.
Holy twisty turn, Batman! I so did not see that coming. Okay, okay. I know readers of this review have no clue what the heck I'm talking about--unless you have read Lani Lynn Vale's new Battle Crows MC series starter already and know what's got me all gobsmacked. But before I get into all that--or maybe I won't since I don't want to get spoilery--this is the part where I tell you that this new series is a spin-off, as is often the case with Vale's books, but you can pretty much dive in if you're either new to the author or have skipped or just haven't gotten around to reading a previous series. There are recurring characters but nothing too confusing.
Always Someone's Monster is the first book in the Battle Crows MC series, and it features Haggard Crow, aka Thief, and Sophia Madden. He's the president of the motorcycle club and the divorced father of Sophia's best friend, Clementine. Oh, he also happens to be best friends with Sophia's father, Madden. Then there's the whole twenty-year age gap between Haggard and Sophia. So, calling their romance "complicated" would be an understatement, but these two have been quietly simmering in their respective lust for each other, and when opportunity strikes, there's no holding them back. However, that was a mistake and one that Haggard knows can never be repeated. But then, he may have underestimated the determination of a beautiful and intelligent twenty-two-year-old who knows what and who she wants and refuses to be kept at arm's length.
It needs to be said: I DID NOT SEE THAT COMING. Now, for you to know what I mean by "that" will require you to go and read this book and have some back story as to what led to "that". Although if I'm being perfectly honest here, nothing indicated "that" would happen. I was shocked and taken aback by the turn of events, that it took quite a bit away from the romance between Haggard and Sophia. Talk about scene-stealing chapters, people. Yes, I know I'm being vague, but no spoilers, so just read the book and you'll see why I'm a wee bit--extremely--heartbroken. All that being said, I did love Haggard and Sophia together, and my curiosity is quite piqued as to what awaits readers going forward. Four stars for Always Someone's Monster.
Release Date: 25 January 2022
Date Read: 21 January 2022
Learn more about Lani Lynn Vale.
Pre-order Always Someone's Monster on Amazon | Apple Books | B&N | Kobo.