Review: Take a Chance with Me by Kristen Proby (With Me in Seattle #18; The O'Callaghans #5) 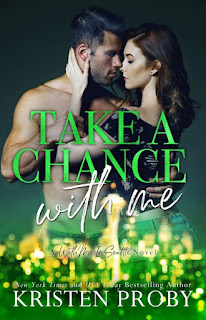 Note: An advance reader copy (ARC) was provided by the author via Valentine PR.
We're back in Seattle with the fifth and final book in Kristen Proby's The O'Callaghans mini-series and eighteenth one in her With Me in Seattle series. If you're like me and you're a longtime reader of this sub-series, then you know that Mary Margaret O'Callaghan and Cameron Cox getting together has been a long time coming. Of course, nothing is that easy or simple, especially given what Cam does for a living. Maggie has had a thing for her eldest brother, Kane's, best friend for quite some time, and when she was twenty-six and a widow of an abusive husband, she went after what--who--she wanted. But when it was all said and done, Cam upped and walked away, leaving Maggie heartbroken and livid. Two years on, she's learned to tolerate his presence, but she's also realized it's time to move on. But Cam has bided his time, and he's either going to have to totally let go of the woman he's loved forever or to finally ask her to take a chance with him.
I love that Kristen Proby has two mini-series now as part of her prolific and much-loved With Me in Seattle. I think it keeps the series as a whole fresh, which is no easy feat. Maggie and Cam's story was one that I enjoyed, and while it may have been a falling-for-my-sibling's-best friend trope romance, there wasn't any unnecessary drama on that front, thank God. The ten-year age difference between the two main characters was often obvious, or maybe it was just more that Cam had a wee bit more patience and maturity compared to Maggie at times. Overall, I liked the connection shared by Cam, Mags, and the O'Callaghans as a whole. Four stars forTake a Chance with Me, and I'm excited for what Proby has for us when we return to her Seattle.
Release Date: 25 January 2022
Date Read: 21 January 2022
Learn more about Kristen Proby.
Pre-order Take a Chance with Me on Amazon | Apple Books | B&N | Kobo.