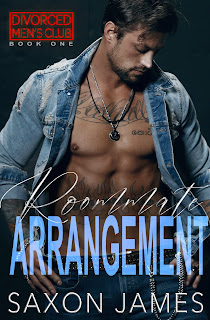 Note: An advance reader copy (ARC) was provided by the author via Foreword PR & Marketing.
Saxon James has a new series, and it's gotten off to such a sweet start! Roommate Arrangement is the first novel in the Divorced Men's Club series, and it introduces readers to a group of guys who are already divorced or in the process of getting a divorce. The first divorcé-to-be is Payne Walker, a forty-year-old who is shocked to learn what his husband of five years--together for twelve years--has been up to for the past couple of years. Leaving his ex behind and returning to his hometown of Kilborough, Massachusetts is the new beginning he needs, but with job prospects looking bleak and staying with his younger brother's family leaving him a wee bit worse for wear, Payne is seriously considering his brother's best friend's offer. Becoming Beau Rickshaw's roommate is a good thing. The thirty-six-year-old bestselling author is a tad...un-normal...but Payne has known Beau since he was a kid, and he's enjoying getting to know this older version of him. Will it change once Payne learns that Beau has had--and still has--feelings for him for years?
This was an awesome read, what with Saxon James taking a much-loved and often used romance trope--falling for your best friend's sibling--and giving it a spin of her own. Payne and Beau were wonderful main characters who were unique and easy to love, each one distinct in his own right. I quite liked Beau's quirks and I swooned over Payne's unquestioning acceptance of said quirks. While Beau was best friends with Marty, Payne's younger brother, he and Payne were able to forge their own friendship, even as they were trying to figure out whether or not to pursue something beyond that. Speaking of Marty, bonus points to him for being the supportive brother and best friend that he was. There wasn't any unnecessary drama from anyone in the story, not even Payne's ex, but there was a bite of angst concerning Beau's insecurities and Payne's belief that he couldn't offer much of anything to Beau. From start to finish, I enjoyed the journey that Payne and Beau were on and can't wait for more from this series. Five stars for Roommate Arrangement.
Release Date: 12 January 2022
Date Read: 08 January 2022
Learn more about Saxon James.
Pre-order Roommate Arrangement on Amazon.