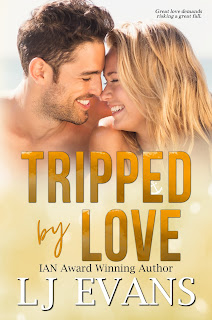 Note: An advance reader copy (ARC) was provided by the author.
LJ Evans's opening salvo for the year is a heck of a winner, and if you haven't gotten around to picking up anything written by this author, might I suggest you start with this one. While Tripped by Love is part of Evans's Anchor series, it reads exceptionally well as a standalone, as is the case with her previous in-series releases. This is, at its simplest, a bodyguard romance, but I think the label that suits it better is a friends-to-lovers romance with a small-town feel. The main characters here are thirty-year-old Marco Hernandez and twenty-five-year-old Cassidy O'Neil, he being a part of Cassidy's brother's security team and Cassidy being a single mother who has her own restaurant. He's known her since she was eighteen, and over the years, they've forged a friendship of their own, but there's a simmering attraction that neither one has acted upon in all that time. So when Cassidy's ex makes an unexpected reappearance in her life, demanding his rights as a father be respected, Marco's protective instincts take over, but can he protect their hearts from breaking?
One of my favorite things about LJ Evans's writing is that she doesn't give you well-worn story lines with well-loved tropes. Having read everything she's penned, her creativity seems to have no bounds (knock on wood!), and readers like me reap the benefits. With this newest release of hers, Evans highlights a love that has grown quietly but surely between her main characters, as well as spotlighting that family isn't necessarily about blood. There's always more to Evans's stories and characters, as evidenced to what was happening to Marco's family and the surprise appearance of Cassidy's ex. And it all made for some truly great reading. There are some cameo appearance from previous couples as well, but they never take the focus away from Cassidy and Marco, which is something that I appreciate. Overall, Evans delivers a romance that is equal parts swoony and sweet while also tackling deeper issues that her main characters are going through, making for a book with depth and the prerequisite elements of heart, heat, and home. Five stars for Tripped by Love.
Release Date: 12 January 2022
Date Read: 10 January 2022
Learn more about LJ Evans.
Purchase Tripped by Love on Amazon.