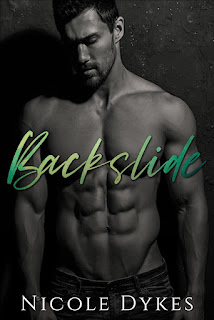 Note: An advance reader copy (ARC) was provided by the author via Wildfire Marketing Solutions.
Backslide is a second-chance M/M romance by Nicole Dykes that shares ties with Runaways, a young adult romance, but both books may be read as standalones. Having said that, I have read Runaways, and I've been looking forward to reading Nash Davis's story since I finished his younger brother and now-sister-in-law's book. Nash has been happy enough working on the land and cabins his brother and sister-in-law own. As long as he knows that Lawson and Raelynn and the rest of the crew that work alongside them are good, so is he. Then a blast from the past shows up with his rumored fiancée by his side. It's been seven or so years since Nash last saw Adrian Walker, and Nash knows better than to get entangled yet again with someone who kept him secret. But tell that to Nash's still broken but possibly foolish heart.
This title had a fair bit of angst to it, as well as a lot of back and forth between the main characters in terms of whether they wanted to take a second shot at being a couple or not. Nash and Adrian went on to live different lives after their plan to be together went awry as seniors in high school, but even though Nash wasn't in the closet, he wasn't exactly living any sort of happily-ever-after. My heart went out to him, but I admired his loyalty to those who meant the most to him. As for Adrian, well, I must admit that it took a while for me to warm up to him. I felt sorry for the guy, even though he was living with the choices that he knowingly made. All in all, this was a pretty good read, although I must confess that using "fiancé" instead of the correct feminine version in the published book bugged the editor in me, but what can you do, right? I'm handing Backslide four out of five stars.
Release Date: 20 January 2022
Date Read: 17 January 2022
Learn more about Nicole Dykes.
Purchase Backslide on Amazon.