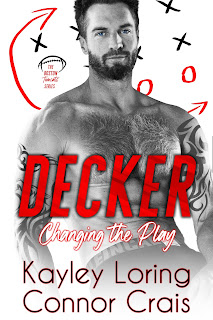 Note: An advance reader copy (ARC) was provided by the authors.
What do you get when a romance author and a romance narrator get together and write not just any book, but one that kicks off a new series? You get Decker: Changing the Play, which surpassed my expectations and has set the bar loftily high for the rest of the Boston Tomcats series. Readers are introduced to titular character Johnny Decker, a highly successful professional football player who has more than made a name for himself on the field as a superstar quarterback and off the field as a ladies' man, earning the nickname "Decker the Panty Wrecker". At thirty-six, the wear and tear of the game are bearing down on him, but he wants one more shot at earning another Super Bowl ring. The sudden passing of the team owner, however, brings with it an unexpected change--the man's estranged daughter taking over as the new owner. The fact that twenty-nine-year-old Hannah Strong knows more about spreadsheets and finances than football has Decker worried. His attraction to her makes things worse. Hannah was going to force him to change his play.
The banter, the back and forth, the simmering mutual attraction, and some honest-to-goodness football and a whole lot of romance? Yes, please! I don't know how long Kayley Loring and Connor Crais worked together on this debut offering of theirs, but it's clear that these two, just like their main characters, Decker and Hannah, have chemistry and gobbled up every bit of the rewards that came with their efforts. The writing duo gave their MCs depth and their story went beyond the usual opposites attract scenario. And can I just say that while I may not be an expert when it comes to (American) football, I very much appreciated that the authors didn't merely skim over it, choosing to be detailed enough that I could imagine what was happening on the field. The romance was ever-present, as was the laughter-inducing comedy, but there was also a bit of angst to this, enough to satisfy even a demanding angst addict like me. If Decker: Changing the Play is a sign of things to come, readers look to be in for more le sigh-worthy happily-ever-afters! Five stars!
Release Date: 13 January 2022 11 January 2022 (early release)
Date Read: 10 January 2022
Learn more about Kayley Loring and Connor Crais.
Purchase Decker: Changing the Play on Amazon.