Review: Pieces of Me by Jay McLean (Pieces #2) 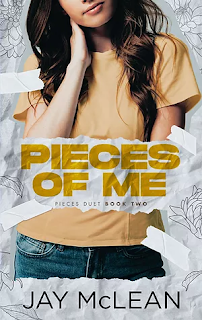 "I may have held on to the missing piece, but you're the one who completes me."

Pieces of Me is the second and concluding book is Jay McLean's Pieces duet, and if the first book, Pieces of You, broke off pieces of my heart, this second one put it all back together. These books MUST be read in order because there's a continuing story line that plays out. Book one is more young adult (YA), what with the main characters being in their teens, but it's more mature YA than cutesy YA; book two is very much new adult (NA), with Jameson Taylor and Holden Eastwood both being twenty-three for most of the story, a lot of which takes place five years after the events in the previous book. I'm going to leave it at that because I don't want to dive too deeply into bits and pieces of the story in case they turn out to be too spoiler-like. Also, based on what I went through, I think Jamie and Holden's love story needs to be experienced alongside them.
Confession time: For about the 45 percent of the book, I wasn't sure if I was going to survive finishing. I had very mixed feelings about Holden. His treatment of Jamie was abhorrent, yet I hate to admit it but I understood his motivations. Does that justify the things he did and said? No, but I empathized with him and I got it because I know how it feels to be hurt and angry and end up either lashing out or being passive aggressive. I also may have been a wee bit worried as to how Jay McLean was going to redeem the guy...but here's a lesson I've learned time and again: Trust your author, especially if it's someone whose work has eviscerated (in the best way possible) in the past. McLean isn't the type of storyteller that does things to her characters just for the heck of it. There are reasons, and as their story unfolds, you'll see why they did what they did and said what they said and why the had to go through everything they did. It made me have a better appreciation for the love that Jamie had for Holden and vice-versa. So, if you're reading the book and you feel yourself wavering, KEEP READING! I promise, it'll be worth it. Pieces of Me is a five-plus-starred must-read.
-------------------------
Read my reviews for the Pieces duet: