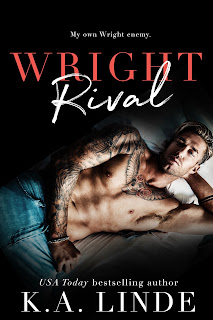 Note: An advance reader copy (ARC) was provided by the author via Wildfire Marketing Solutions.
Wright Rival is the tenth book in K.A. Linde's Wright book universe and the third one in the Wright Vineyard series, which features the Wright cousins. This enemies-to-lovers romance is about Hollin Abbey, who happens to be Jordan and Julian Wright's cousin (Wright with Benefits and Serves Me Wright, respectively). Celebrating the first anniversary of the Wright Vineyard was a milestone for Hollin and his cousins, and entering the IWAA Texas Wine Competition would be another feather in their cap when they win. But Piper Medina is making it clear that she has no intention of letting that happen. Working for Sinclair Cellars is a big deal for her but her love for wine making is courtesy of her father. Piper's entered the competition as well, and she certainly doesn't mean taking this as an opportunity to lower the man she dislikes with a passion a peg or ten. They're rivals and will never, ever be more than that, no matter what her body and heart tell her.
Hollin Abbey was the absolute best thing about this book. He was cocky but kind-hearted, smirky yet sweet, loyal to his family and those he cared about and passionate about his business. He never really saw Piper Medina as his enemy; she was more of the girl whose buttons he enjoyed pushing because she was as reactive as she was every single time. Think of this as an older version of the boy pulling the pigtails of the girl he liked. Now, as far as Piper is concerned, well, I didn't really click with her right away. It took a good, long while for me to not find her as irritating as I did for a big chunk of the book. She made assumptions about Hollin and probably stuck to those assumptions because she didn't want to admit she was attracted to him. The rivalry between their wineries was interesting, and I enjoyed seeing the previous couples as well. All in all, it took a while for me to fully immerse myself in the story and the couple, but Wright Rival was still a 3.5-starred read.
Release Date: 11 January 2022
Date Read: 10 January 2022
Learn more about K.A. Linde.
Purchase Wright Rival on Amazon | Apple Books | B&N | Kobo.