Review: Just About Over You by Carrie Aarons (Prospect Street #2) 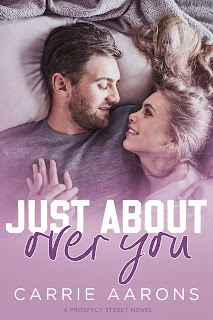 Note: An advance reader copy (ARC) was provided by the author.
Carrie Aarons starts off 2022 with the second book in her Prospect Street series, Just About Over You. If you've read the series starter, Then You Saw Me, then you'll recall how Gannon Raferty went on a reality dating show and unknowingly broke his best friend, Amelie Brook's, heart. He can't quite understand why the reception he receives from Amelie is as cold as it is or why it almost seems as if she would have him anywhere but in the house they share with their close-knit circle of friends. All she wants to do is to accept that he'll never see her as anything more than a friend and move forward with her life. Then Gannon and Amelie end up sharing one unforgettable night, but when fate strikes another blow, will it end something that's barely started between them or will it make them stronger?
I've been looking forward to reading this book ever since Gannon returned to a less than warm welcome from Amelie and the rest of their friends and housemates to the house on Prospect Street. It took a bit for me to warm up to Gannon, who was a wee bit clueless, but the guy proved to be a keeper and someone deserving to be with someone as sweet and loyal as Amelie. I appreciated that these two had some depth to them, and that they had their share of struggles before getting to a place where they could finally embrace their much deserved happy ending. Just About Over You was an easy-going, four-starred read, and Carrie Aarons's Prospect Street continues to impress.
Release Date: 21 January 2022
Date Read: 19 January 2022
Learn more about Carrie Aarons.
Pre-order Just About Over You on Amazon.