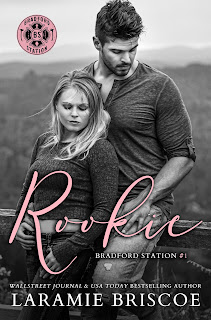 Note: An advance reader copy (ARC) was provided by the author via Grey's Promotions.
Laramie Briscoe's got a new series, and this time around, her recurring cast of characters are all part of one fire station. Bradford Station starts off with Rookie, which is the story of, you guessed it, the newest rookie at the station and the girl he falls for--who just happens to be the Chief's younger daughter. Said rookie is Danny Ramirez, son of an immigrant father and the daughter of the founding family of Bradford, Tennessee. The minute he helps Hayden Hudson change her flat tire, he knows it's a life-changing first meeting. But then he quickly realizes that she's his boss's daughter--one of two that he and the rest of the firefighters under her father's command have been warned away from her and her sister. Will Danny and Hayden douse the spark that's between them or can it ignite something more for these two?
This was a good start to the Bradford Station series, one which allows for glimpses at potential main characters as the series progresses--enough to pique a reader's curiosity but never stealing the limelight from the actual main characters and their story. There was the whole rule against dating the Chief's daughters/their father's men, but it was refreshing that Laramie Briscoe didn't let this part of the story linger more than necessary. There were moments in the book wherein it felt as if we were hoping, skipping, and jumping from one chapter to another, but I still enjoyed Rookie as a whole and was left truly looking forward to the next one to come. Four stars.
Release Date: 21 January 2022
Date Read: 18 January 2022
Learn more about Laramie Briscoe.
Purchase Rookie on Amazon | Apple Books | B&N | Kobo.