Review: Just One Spark by Carly Phillips (The Kingston Family #4) 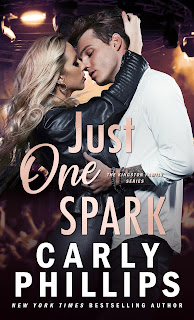 Note: An advance reader copy (ARC) was provided by the author via Wildfire Marketing Solutions.
Just One Spark is the fourth book in Carly Phillips's Kingston Family series, and this time around, we've got Dash Kingston's story. Dash is the youngest brother among the five siblings, and he also happens to be the most famous among them. He's the lead singer of the Original Kings, and he's more than enjoyed what stardom has brought him. That is until a one-night stand got pregnant and named him as her baby's father. The scandal may be the one thing that knocks some sense into Dash, making him realize that he needs to get his life in order. The suggestion of entering into a relationship with a fake girlfriend sounds like it may do the trick, but the best woman for the job, Cassidy Forrester, may not be all that willing to help--not when Dash hurt her not too long ago, and not when Cass is the band's drummer's sister.
This is a rock star romance with a hint of a redemption story to it. Dash may seem like he's on top of the world, but it takes an unplanned pregnancy scandal to push him off that pedestal and make necessary changes. I liked that he took stock of his life and recognized his shortcomings without laying blame on anyone else. He wasn't a bad guy at all; if anything, he simply truly embraced everything that came with being part of a world-famous band. I do think, though, that being with Cass and realizing what he could have if only he made certain changes was part of his growth and development. Aside from their romance, I liked seeing Dash with his mom, his siblings, and his siblings' partners. I look forward to the upcoming novella featuring Cass's brother, and the next novel with Aurora. 4.5 stars go to Just One Spark.
-------------------------
Read my reviews for the Kingston Family series: