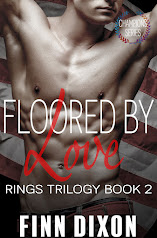 Floored by Love
(Rings #2)
by Finn Dixon
Date Released: December 29, 2021
About Floored by Love
Lucas
I tell myself I can do it all over again. And do it better. Even without a boyfriend.
I mean...who better to succeed at the Olympics than me? Though training this close to Cam again and seeing how his body has developed might be too much for me.
Plus, being naked in the locker room with him makes it even harder...to focus.
It doesn’t take long for my pining curiosity to turn into desperate hope.
Is it possible that Cam still has feelings for me?
Camden
I relied on Erika to survive my heartbreak. I even made a new friend, the tall glass of water known as Colton. Any normal gay dude would have thrown themselves at him and said, ‘Pick a hole.’
Not me, of course. While I was tempted, at least one part of me didn’t give the green light. My heart.
What was left of it still belonged to Luke.
Without answers for what happened in Brisbane, he’s my teammate again. If only my hormones would mind their own business, then maybe I could focus on the Olympics and worry about Luke after I win.
Piece of ass...I mean, piece of cake.
I’m so fucked.
Floored by Love is a full-length gay romance novel, the second in the Rings trilogy, with no major triggers, but possibly a little angst. Within these pages, you’ll find notepad flirting, almost-sex in a hospital, freeballing, a wet superhero with a bare ass, five Olympians in a hot tub and muscles flexing beneath designer jockstraps. Oh. It’s also the Olympics again. And though there’s a third book coming, there is no cliffhanger this time. 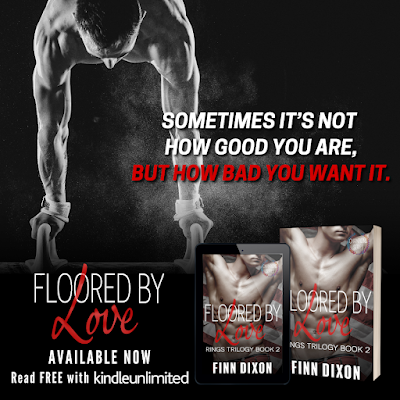 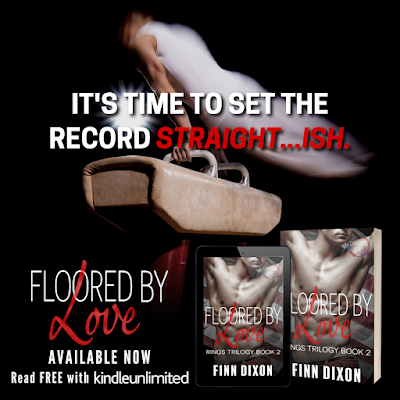 An Excerpt from Rings of Lust
“No! No! No!” Cassandra yelled at me for what seemed like the fifth time in five minutes. I was on the pommel horse and apparently, I wasn’t performing to her standards. “Your transitions are getting sloppy, Lucas. How many times have I told you that?”
I finished the flair sequence I was on and dismounted. “Too many to count,” I muttered.
But she must’ve heard me. “You’re gonna keep counting, Lucas. Because I’ll keep saying it until you get it right.” I felt my eyes roll before I could stop them and she barked, “Again!”
She worked me on the horse until my arms were jelly and she could tell. I was really getting sloppy when she finally told me to take a break. I knew not to complain about the intensity. That only made it worse with her. After almost four years, I knew what not to do around her. Complaining was one of those things, and talking about anything personal was another. I headed over to the bench, wiped the sweat off my brow and armpits with a towel, and alternated sips between Gatorade and water.
Ty jogged over to me. “Is it safe?” he joked.
I looked behind him. “Probably not for long.” Cassandra was on her phone. “How’s it going, Ty?”
“That’s ‘Coach Ty’ to you, bro.”
“Ah yes. I still don’t understand how you manipulated Woodward into giving you that kind of authority, Assistant Coach Ty.”
“My natural charm?”
“You certainly put the ass in assistant. 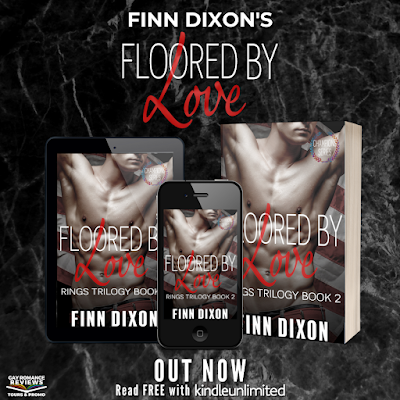 Finn Dixon is a full-time zookeeper in hot-as-balls Florida that writes hot-as-balls MM romance in his free time. A long-time fan of the genre, he is dipping his toe into the pool of sizzling and spicy writers already out there and hoping to score.
If you liked that opening paragraph, or the self-deprecating sense of humor that came with it, you’ll love his style of writing. When he isn’t being sarcastic or trying to make someone laugh, he spends his other free time annoying his boyfriend, snuggling with two kitties, and giving car-walks to his beloved dog.
Finn also likes watching gay films and shows with happy endings (giggity), playing Animal Crossing, re-watching Jurassic Park, and travelling when he can afford it.
And yes, I like jocks, but I promise all my books won’t be about them.
Or will they?
Connect with Finn
Website | Facebook | Instagram | Goodreads | Amazon 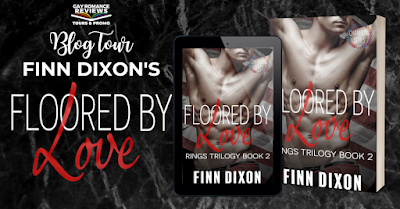