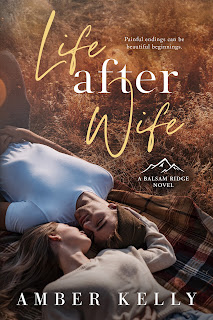 Note: An advance reader copy (ARC) was provided by the author via Wordsmith Publicity.
Amber Kelly launches a new small-town romance series with the story of a divorced single mom who finds her way back to her hometown and discovers an updated version of herself and potential for new love with an old friend. Life After Wife is the first book in Kelly's Balsam Ridge series set in the fictional town of the same name located in Tennessee. Readers are introduced to Taeli Lowder née Tilson who learns of her husband's extracurricular activities when his mistress comes knocking with the upcoming "extra" in full view. With her twelve-year-old son in tow, she makes her way back to Balsam Ridge in hopes of figuring out what happens next over the summer. Falling for widower Graham Tuttle, one of six brothers of the town's most famous family, wasn't part of her plan, but life after being a doctor's wife is turning out to be surprising.
This was a great start to a new series, not that I'm really all that surprised since Amber Kelly has already shown that small-town romances are her jam. I'm also a sucker for the single-parent trope, but that doesn't mean that I'll adore every single one that crosses my reading app. What makes this series starter a truly good read is that her main characters are endearing and have strong chemistry whilst also having a story that many readers can relate to in one way or another. I loved Taeli's determination to create a better life for herself and her son, Caleb, refusing to allow the failure of her marriage to dictate her future. And Graham? The guy was all about #BookBoyfriendGoals. No, he wasn't perfect, but I seriously liked that about him, and kudos to him because he wasn't trying to be some sort of lofty male ideal. Overall, Life After Wife was an entertaining 4.5-starred read.
Date Read: 30 January 2022
Learn more about Amber Kelly.
Purchase Life After Wife on Amazon.