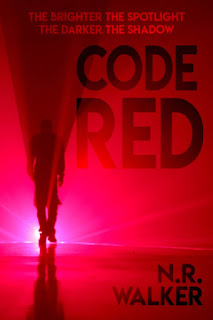 N.R. Walker's Code Red was one of the more talked about M/M romance releases of 2021, and it's taken me THIS long to finally read it. I know, I should be embarrassed, and I am, but then, I'm also thankful that I have Kindle Unlimited because it allowed to get my grabby hands on it, and boy, oh boy, am I completely smitten! The story revolves around Maddox Kershaw and Roscoe Hall. The former is twenty-three and the lead vocalist, songwriter, and considered the leader of Atrous, a mega-famous boy band that he started with friends when they were all sixteen. The latter is thirty and is one of three managers of the band, but Roscoe's worked exclusively with just Maddox for four years. He's also had feelings for the guy for about that long, but then Roscoe's aware that nothing could ever happen between them. What he can be is Maddox's sounding board, the one person outside of the rest of the band that can serve as an anchor. When fame and notoriety become to much for Maddox, Roscoe, in turn, becomes his safe place and the person he entrusts his heart to.
I adored this book! Maddox and Roscoe already had an established relationship, professionally as talent and manager, respectively, and personally as friends, when the story begins, but it was still interesting to see them evolve into more than what they already were. One of my favorite things about these two was the fact that they were openly gay. The whole being in the closet story angle is one that's probably the most common when it comes to M/M celebrity romances, so the main characters being out and open was a welcome change of pace. Speaking of characters, the supporting cast was quite memorable! From the rest of the members of Atrous to the security guys, managers, and other prominent Platinum players. Having read this book at this point in time, I already know that there is a second Atrous novel, this time featuring Jeremy Dalton, who also happens to be Maddox's best friend as well as his co-leader of the band, and Steve Frost, head of the band's security, and I'm excited to see what awaits them. As for Maddox and Roscoe, I'm giving Code Red five stars.
Date Read: 16 February 2022
Learn more about N.R. Walker.
Purchase Code Red on Amazon.