Review: A Chance for Us by Corinne Michaels (Willow Creek Valley #4) 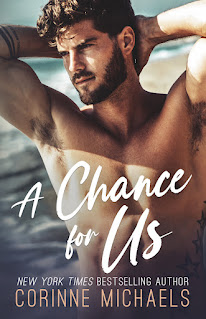 Note: An advance reader copy (ARC) was provided by the author via Valentine PR.
I was feeling all antsy about this fourth and final Willow Creek Valley book because I knew it was going to close out a series that I've grown very much attached to, but like so many things in life, even good things have to come to an end. A Chance for Us is the story of Oliver Parkerson, thirty-one and brother to Joshua, Grayson, and Alexander and twin of Stella. It would be easy to slap the "marriage of convenience romance" label on this, but it was so much more than that. Ollie shares his story with Maren McVee, also thirty-one and an analyst with Cole Security (yes, THAT Cole Security!). They met in college, sharing ties via his ex-girlfriend, who just happens to be Maren's best friend, Devney Maxwell (now Arrowood, and yes, THAT Devney!). While this book shares ties with two of Michaels's past series, this may still be read as a standalone.
Booking an old friend's wedding at the Firefly Resort seemed like a great idea. It would bring money in and serve as a good test run for the resort Oliver Parkerson and his siblings owned. It was also a favor of sorts to Maren McVee, the bride-to-be and a friend from college that Ollie hadn't seen in a while. There were issues that needed to be ironed out before the wedding, including how to not make the whole seeing his ex who was also Maren's matron-of-honor not be more awkward than it has to be. One thing he never anticipated, however, was the fact that Maren's fiancé had broken off their engagement. Another was her asking him to step in and be her groom! Seeing her happy and settled down is her father's dying wish, and Maren is willing to do whatever it takes to give it to him--even if it means marrying someone she isn't quite in love with...yet.
What a way to end a series! I'm not a huge fan of the whole marriage-of-convenience romance trope, but then this is Corinne Michaels we're talking about here, and I had a feeling she wasn't going to take the road often travelled when it came to weaving Oliver and Maren's story. I need to give bonus points because Oliver is my favorite name in the whole world, and the fact that this particular Oliver was such an amazingly giving and lovable man was the icing on top of the cake. As for Maren, while her plan to make her father at peace and content in the time that remained may have been flawed, how could I not love someone who loved her parent that much? Ollie and Maren together was kismet, and I enjoyed having all the Parkerson siblings reveling in their happy endings. Even Alex, who remains the one I'm most curious about. Five stars go to A Chance for Us!
-------------------------
Read my reviews for the Willow Creek Valley series: