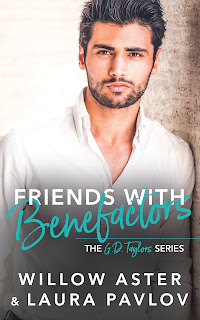 Note: An advance reader copy (ARC) was provided by the authors.
Gah! I can't believe this series has come to a close with this fifth and final book. Willow Aster and Laura Pavlov are two authors who surprised me with their G.D. Taylors series since I'm more used to their heavier, more angsty books. This co-written series about close-knit siblings--Spence, Jesse, Caden, Gus, and Penelope--and the ups and downs of running their own business while also unexpectedly finding love and forever has been a source of reading joy, so while I've been looking forward to reading Pen and Beck's story, I always knew it was going to be bittersweet. Such is what happens with a beloved series.
Friends with Benefactors is Penelope Layne Taylor's story, one she shares with her best friend, Beckham Davis Ellingsworth. Pen is twenty-two and works with her four older brothers, and Beck is twenty-three and works with his father. As close as these two have been since they were in kindergarten, the past few months have seen them spending more time apart. The reason? One unforgettable kiss. Neither one wants to risk their friendship to explore the possibility to go from platonic to passionate. But will pretending they aren't attracted to each other going to cost them the happily-ever-after they deserve?
All it took was one kiss to complicate things between forever besties Pen and Beck, and even though these two have no issues when it come to being open and honest with each other, matters of the heart add a layer of complexity. I loved seeing how much Beck was a part of the Taylors, and kudos to Pen for being both tender and tenacious. From the not-so-subtle flirty banter between the main characters to the laugh-out-loud shenanigans among the Taylor clan, Friends with Benefactors turned out to be a wonderful four-starred end to what's been an equally wonderful series. I'm going to miss these G.D. folks!
-------------------------
Read my reviews for the G.D. Taylors series: