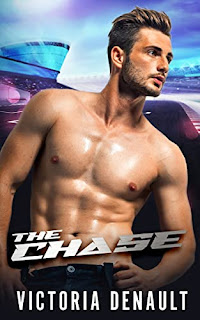 Note: An advance reader copy (ARC) was provided by the author.
Victoria Denault is known for her hockey romances, but now, she's switching gears and lanes with her Racing Hearts series, turning the spotlight on Formula One. The Chase is the first book, and it introduces readers to the Mirabelli Racing Team, co-owned by one of racing greats, Sebastian Castera. When he decides the time has come for him to retire, he hands over the reins to his elder daughter, Francesca, who knows all too well she has her work cut out for her. Not only is she a female and young at twenty-eight, but she's also seen as nothing more than a social media influencer, albeit a highly successful one. But racing is in Frankie's blood, and she's prepared to prove herself worthy. The greatest complication, however, comes in the form of William James. The twenty-seven-year-old F1 driver is one of the best around and he proudly drives for Mirabelli. But ten years ago, he ghosted Frankie and never explained why, not that she gave him the opportunity since she's barely acknowledged Billy's existence from that time onwards. There's no avoiding him now, especially since it seems he can't quite stop himself from chasing this fierce and beautiful woman.
I. FLOVED. THIS!!! I may have been a wee bit worried about Victoria Denault writing about a new sport, especially since she does hockey romances so darn well, but it's clear that she's done her research. I loved the romance aspect here, but I was quite happy to note how much of the Formula One world she'd included, both on and off the track. She's also got two standout main characters in Frankie and Billy. There was a lot of push and pull going on, as is usually case when your head tells you one thing but your heart (and libido) tell you something else. Aside from the whole second-chance romance angle, there's a bit of a mystery in the story, but I'm not going to get into it in this review so as to avoid any accidental slips of the spoiler-like variety. I truly enjoyed this series starter, and I'm looking forward to seeing where Denault takes readers next in this new Racing Hearts series of hers. The Chase has set the bar quite high, which is why it easily garners 4.5 stars.
Release Date: 28 February 2022
Date Read: 26 February 2022
Learn more about Victoria Denault.
Pre-order The Chase on Amazon | Apple Books | B&N | Kobo.