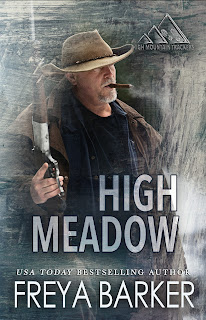 Note: An advance reader copy (ARC) was provided by the author via Buoni Amici Press.
A new series from Freya Barker? Umm, yes, please! High Meadow is the first in her High Mountain Trackers series, and it's every bit as good as I'd hoped it would be. Readers are introduced Alexandra Hart and Jonas Harvey and to the town of Libby, Montana. She's a forty-five-year-old widow with an adult son who owns and runs Hart's Horse Rescue; he's fifty, former career military, and now owner of High Meadow Ranch and heads the High Mountain Trackers. They don't get off to the best of starts, and when Alex shows up to help rehabilitate Jonas's prized stud stallion, he's not entirely sure just how capable she is of handling the task at hand. But Alex shows Jonas how wrong he was to underestimate her, and with each day that passes, the impression she leaves him with goes beyond how well she does with his horses. Together, it looks like they could have a future together, but complications arise when Jonas and his crew search for domestic terrorists.
This author never fails to weave the sort of stories that I can sink my proverbial teeth into. I love that I'm able to start this new series off from the get-go, meaning I can read each new book as its released because then I feel like I'm experiencing the same journey as the cast of characters at the same time. Alex and Jonas were such a dynamic duo (and no, I'm not talking Batman and Robin here). They were layered and had interesting back stories, which is why I appreciated that they're coming together as a couple wasn't rushed. There were issues that needed to be taken care at the same time they were becoming closer, but I adored that they found solace with each other. The romance aspect was so on-point with who these main characters were and the suspense part had me flipping from page to page, eager to see how everything would be resolved. Giving High Meadow a five-starred rating is a no-brainer; same goes with reading the next book in this promising series.
Date Read: 19 February 2022
Learn more about Freya Barker.
Pre-order High Meadow on Amazon | Apple Books | B&N | Kobo.