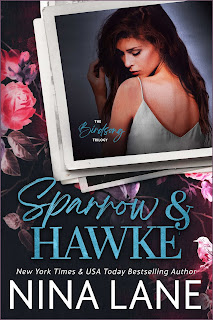 Note: An advance reader copy (ARC) was provided by the author via Give Me Books Promotions.
My introduction to Nina Lane's writing came by of her much lauded and loved Spiral of Bliss series back in 2016, one which remains an all-time favorite of mine. I've read and adored her other books since then--the Sugar Rush series, the What If duet, and The Secret Thief standalone--but it has been about three and a half years since my last read from her. So imagine my unbridled delight when I found out that she had a new trilogy in the works for 2022! Birdsong is the story of Nell Fairchild and Darius Hawke. There was a time when Nell thought of her father's best friend--and her late mother's stepbrother--as "Uncle Darius", but the man who shows up at their home after years of not visiting is more stranger than anything else. But then Nell isn't the same girl she once was. She's a high school senior whose art speaks more about who she is than mere words can, and while he's an award-winning photojournalist, Jonas has reluctantly agreed to teach at Nell's school. Life has changed for these two over the years, and now, it's about to irrevocably change again...
I don't want to give anything away when it comes to what happens in this book, so I'm trying REALLY hard to watch what I include in this review of mine. This is one of those love stories--and that's what it is, a love story, not your typical romance with a quick-fix resolution to an issue or two that the main characters go through--that demand to be experienced as everything plays out on the page. Nell and Darius did not just go through something in their respective pasts; they're actually still going through it. They're complex and imperfect, and it's difficult to not become emotionally invested in them and their journey. Fair warning: This is a trilogy that features the same couple, so don't expect a happily-ever-after ending in this first book (or even the second one). I know that can seem frustrating, but if the two novels that'll follow Sparrow & Hawke are at par with one another--and by "at par" I mean "undeniably mesmerizing"--then the wait in between each, which is about three or so weeks, will be both oh-so-worthwhile and rightfully anticipatory. Five stars.
Release Date: 22 February 2022
Date Read: 20 February 2022
Learn more about Nina Lane.
Pre-order Sparrow & Hawke on Amazon | Apple Books | B&N | Kobo.