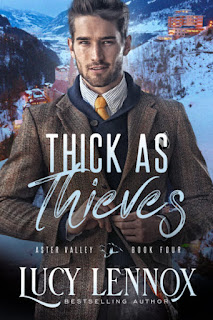 Note: An advance reader copy (ARC) was provided by the author.
Lucy Lennox takes readers back to the picturesque town of Aster Valley in Colorado with the fourth full-length Aster Valley novel, Thick as Thieves. This is the much awaited friends-to-lovers romance between Julian Thick and Parker Ellis, aka Jules and Parks. These two have been the best of friends since they were young kids, and Julian has probably been in love with Parker for just as long. But while Julian is gay, Parker is straight, and because Julian loves Parker beyond measure, being his best man at his wedding was a no-brainer. His heart, however, may never recover. So, he's decided it's time to move forward from his unrequited love, and time away from Parker will help. Then Parker ends up becoming a jilted groom, and Jules decides to take him to Aster Valley to help him get over being left at the altar. When certain truths come to light, how will things change for these two BFFs?
It was difficult to not fall in love with Julian and Parker! I adored the friendship they shared because it was clear that they were, indeed, each other's person. My heart ached for Jules because he was so darn in love with Parker, but believed it was all for naught, what with Parks being straight and all. But sometimes, all you need is something life-changing to make you open your eyes to see your own truths--and yeah, I'm looking at you, Parker!!! And kudos to having an amazing circle of friends and supportive and loving family, and these two had all that and more. Lucy Lennox doesn't disappoint, making Thick as Thieves a sweet and witty 4.5-starred read.
Release Date: 01 March 2022
Date Read: 27 February 2022
Learn more about Lucy Lennox.
Pre-order Thick as Thieves on Amazon.