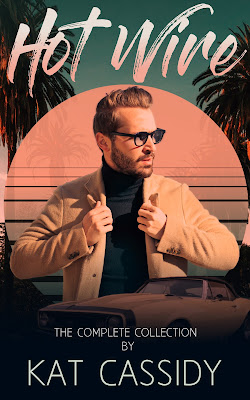 Hot Wire: The Complete Collection
by Kat Cassidy
Release Date: February 3, 2022
About Hot Wire: The Complete Collection
Peter Bauer is a thief. Cars specifically, under the employ of his monstrous father Erik who’s chiseled out a spot in Los Angeles’ brutal underworld. He only knows how to live recklessly, like there isn’t a tomorrow. But at the end of his rope following a broken heart, drug addiction and a stint in prison, he’s left wondering for the first time what comes next and if there’s any way out of the life he never asked for.
Nik Petrakis is a mechanic. Haunted by tragedy, he’s found himself in a place he never imagined, chopping cars for Erik Bauer. He never imagined Peter Bauer either, but the two broken men are soon caught in the undertow of a powerful attraction. Together, they are going to have to navigate the stirrings of new love with dangerous consequences while a gang war that could consume them both brews on the horizon.
Across three thrilling volumes, the Hot Wire saga takes readers on a wild ride through a world of crime, sex, twisted family dynamics, and a romance that just might offer the kind of redemption the heart of a thief hungers for.
CONTENT WARNING: Abuse, addiction, smoking, drug use, suicidal ideation, cheating
This book is a revised and expanded collection containing the three previously published volumes of Kat Cassidy’s Hot Wire series: Night Moves, Backstreets, and Breakdown, as well as several limited release short stories from that universe. 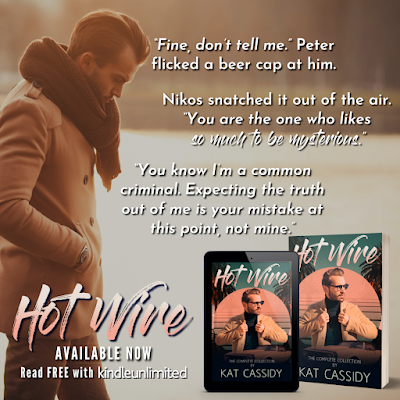 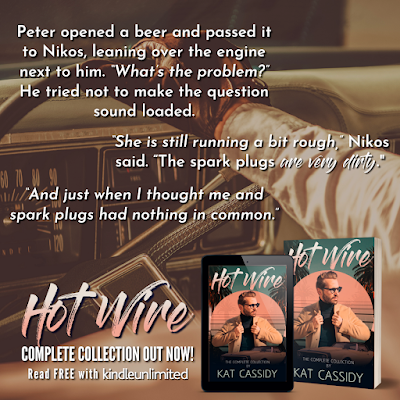 An Excerpt from Hot Wire: The Complete Collection
“Peter, you really do have a talent for making terrible decisions,” Erik said, gesturing with bland contempt at the Cobra parked in the closest bay of the chop shop. Under the harsh fluorescent lights, the pristinely restored Monza red factory paint looked almost obscene. “Do you care to tell me exactly what you were thinking when you picked up this monstrosity?”
Peter was alone with his father, a position he avoided if he could help it. It would be at least half an hour until the night crew began trickling in to set about their business of stripping stolen mid-range cars for parts—his father’s business, a modest empire built on catalytic converters and coercion with the odd act of petty violence thrown in for good measure. Erik Bauer wasn’t the biggest player in LA, or even the most brutal, but he was smart and that had taken him far.
Stealing the Cobra, on the other hand, was the opposite of smart. Peter was unofficially the lead hand of the street team, a job which mostly consisted of strong-arming half a dozen other lowlifes into sniping three to five-year-old Camrys, Altimas, and Rams in bulk, and the occasional new model Porsche or Maserati when a valet was exceptionally careless. Their operation didn’t do classic cars—they were too heavily insured, too limited, too easy to track, and too hard to move.
He may have planned tonight’s job like a career criminal, but it was an amateur move on Peter’s part, fueled more by a righteous fury over a shit-bird like Daniels Jr. owning a car like this than any real savvy.
Several weeks ago, Peter spotted him and, more importantly, his work of American muscle car perfection, at a trendy restaurant in the downtown core. He’d watched as the guy tossed his keys at the pretty blonde valet. Literally. She’d been helping another customer when Daniels Jr. threw his key fob down the front of her shirt and then patted it for good measure.
The girl stood there for a moment, mouth open, fists clenched, and then Daniels Jr. leaned in close and whispered something to her that had reduced her to tears. And that had been it; Peter made a vow to himself right then to steal the car.
Tonight, after two weeks of meticulous preparation, he’d made it happen. The moment he’d pulled it into the garage he’d realized with a wave of nausea just how impulsive he’d been. Erik was right to be angry at him.
Erik was always angry. And Erik was always right.
Peter sighed, rearranging his face into something he hoped could pass as more indifferent than the embarrassment he felt. Suddenly he was a kid again and his father was furious at him for stealing a chocolate bar from the corner store. Not mad he did it, of course, but mad that Peter had gotten caught.
“How could I not? It was practically begging to be taken,” Peter lied, trying to keep his voice steady. He couldn’t explain about the valet, his father would just call him soft. Erik would be right about that too. “Doors wide open, keys in it and running. Some boomer and his mistress probably fucking down by the water before his Viagra wore off.”
“Now, now, Peter, there’s no need to be crude,” his father said, stooping to retrieve a tire iron someone had abandoned on the shop floor after last night’s work.
He rose slowly, deliberately, and then in one vicious movement Erik drove the tool into the Cobra’s headlight. A shower of glass sprayed out in a thousand razor shards and Peter flinched in spite of himself, the scar across his arm twinging. This time his father’s rage was directed at the car, but he knew from experience the target could change in an instant.
Erik turned his back to him, setting the tire iron calmly on the workbench. “Clean up your mess.”
Peter exhaled through his teeth, willing his heart to slow down. He watched his father go, waiting until Erik ascended the stairs, until the light went on in the little office, until his own breath stopped hitching in his chest. 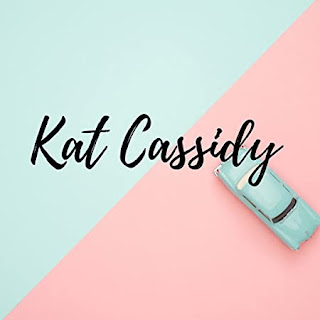 Kat Cassidy is a romance novelist. She’s a dreamer, a schemer and, above all else, a believer in true love. She lives in Canada with her husband, her toddler, and her lovable mutt, and she likes loud guitars and strong IPAs.
Connect with Kat
Website | Facebook | Facebook Group | Twitter | Instagram | Goodreads | Amazon 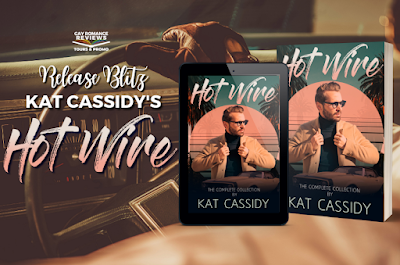