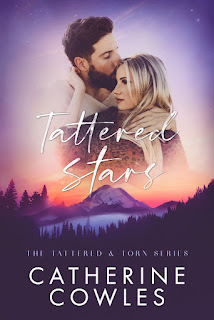 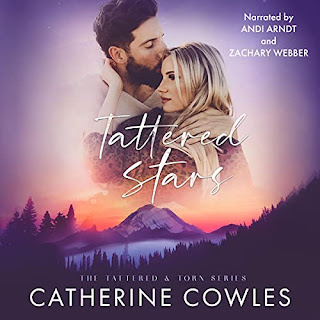 "Anyone can be brave for twenty breaths. And in that time, you can do almost anything. Or at least take the first steps you need to get there."

Knowing that Catherine Cowles had a new series in the offing had me giddy with excitement. I may have a wee bit of an addiction to this author's writing because she never fails to strike that fine balance between romance and suspense in her books. I've been hooked from her debut standalone to every series that's followed, and this new series starter not only held my attention from start to finish, but the supporting characters piqued my curiosity. Even at this early stage, I've already begun to become emotionally invested, which basically ensures that I'm going to want read their stories in the near future.
Tattered Stars is the first book in the Tattered & Torn series, and from the moment eleven-year-old Everly Kemper appears on-page and I see the choice that she's made, I had an inkling her story was going to be one that would stay with me. And it did. Fifteen years later, Everly makes her way to her hometown of Wolf Gap, Oregon, but some people are making it glaringly clear that she isn't welcome back. One of those is Hayes Easton, the town's thirty-year-old sheriff. Everly is a reminder of what happened a decade and a half ago. They both want to move forward, but someone has other plans...
I don't always have an opportunity to read and listen to a book at the same time--the same book, obvs--so I relished doing so with this Tattered & Torn series starter. Catherine Cowles has created two main characters with ties to each other--the sort of ties that part of them wanted to break from while also being what made part of their connection so unique. I loved how Everly was embraced by the Eastons, and I appreciated how Hayes recognized just how extraordinary she was. Oh, and the narration? You can't get any better than Andi Arndt and Zachary Webber. Swoon! Five-plus stars go to Tattered Stars.
Release Date: 01 February 2022
Date Read and Listened to: 29 January 2022
Learn more about Catherine Cowles.
Learn more about Andi Arndt and Zachary Webber.
Purchase Tattered Stars on Amazon | Apple Books | Audible | B&N | Kobo.