Review: Up in Smoke by Kate Meader (Hot in Chicago Rookies #1) 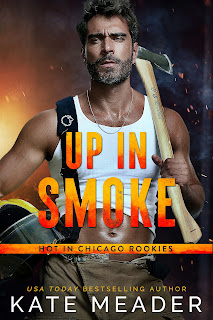 Note: An advance reader copy (ARC) was provided by the author via Wildfire Marketing Solutions.
Kate Meader's Hot in Chicago series, which featured the firefighting family of the Dempseys, is what got me hooked on her writing, so when I learned that she had a spin-off series in the offing, I knew it had to be on my to-be-read list. Hot in Chicago Rookies kicks off with Up in Smoke, and while the Dempseys do make cameo appearances, this new series starter can be read independently of the original series. Instead of an "office romance", here we've got a fire station romance, what with the main characters belonging not only to the Chicago Fire Department's Station 6, but also on the same shift. And did I mention that the heroine is a rookie firefighter, and the hero is her boss who happens to be a single dad to boot?
Ah, Lieutenant Roman Rossi... I didn't think anyone could give Luke Almeida (Flirting with Fire, Hot in Chicago #1) a run for his money as my favorite Kate Meader hero, but Roman certainly did. Could the guy be any better?! He's a devoted father, a dedicated firefighter, and a fair leader, and how he loved Abby Sullivan, who had a legacy of her own when it came to firefighting. Roman went above and beyond for those who mattered most to him, including Abby. They had a lot on the line, but he knew she was worth it. Abby had a bit of catching up to do when it came to the conviction of her feelings for Roman, but I also understood her hesitation. Up in Smoke gets 4.5 stars, and I look forward to reading the next book in the series!
Release Date: 22 February 2022
Date Read: 20 February 2022
Learn more about Kate Meader.
Pre-order Up in Smoke on Amazon | Apple Books | B&N | Kobo.