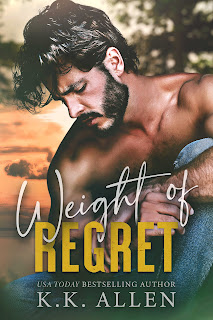 Note: An advance reader copy (ARC) Was provided by the author via Wildfire Marketing Solutions.
Weight of Regret is the first book in K.K. Allen's Bexley Brothers series, which is a spin-off of her BelleCurve series, specifically the fourth book, Over the Moon. Having said that, you don't necessarily need to read the aforementioned novel before jumping into this series starter, although they do share the same setting, Camp Bexley (then known as Camp Dakota), and the main characters in Weight of Regret, Hope Davies and Anderson Bexley, were supporting characters then. Now, Hope has been in love with Anderson for all the time she's known him, and her greatest hope (no pun intended!) is that the time will come when he finally opens his eyes and heart and sees her as more than his sister's best friend and a valued camp employee. But he went and broke her heart, leaving Hope no other alternative than to leave the camp--and man--she loved. For the past year, she's been living a pretty good life in Seattle. Hope's got a job she's good at and a man who wants more with her. But fate is about to throw a curveball, one that sends her back to Camp Bexley...and Anderson.
Ah, unrequited love... Although to be fair, in the case of Hope and Anderson, it may not be as unrequited as the former thought it was, but that's what happens when the latter isn't exactly the most forthcoming when it comes to his feelings. There's quite a bit of history when it comes to Anderson, who is now, for all intents and purposes, the head of Camp Bexley, courtesy of his family and one tremendous loss they experienced years ago. He's truly a good guy, to the point that he's basically put everyone ahead of himself. Hope adored him, but sometimes, something's got to give in order for progress to be made. Regrets are there and all, but so is a second chance to get things right. Of course, things are complicated--when are they not in the world of romance?--and there's a great deal of back and forth once Hope makes her return to help out Anderson and the camp  with their marketing. There are moments when changes, especially when it comes to demeanor, shift without preamble, but still, Weight of Regret remained a rather engaging four-starred read.
Release Date: 24 February 2022 22 February 2022 (early release)
Date Read: 22 February 2022
Learn more about K.K. Allen.
Purchase Weight of Regret on Amazon.