Review: How Good It Was by Scarlett Cole (Excess All Areas #3) 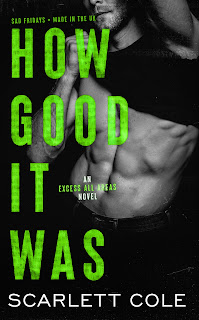 "I could lose myself in you, Will."

Scarlett Cole has just released the third novel in her Excess All Areas series, and let me tell you just how good it was! (See what I did there?) How Good It Was is Luke Bryson's story, one he shares with Willow Warner. He's the twenty-nine-year-old drummer for Sad Fridays, an up and coming band from the UK, and she's a twenty-three-year-old former child actress turned famous social media influencer from the US. The two share a one-night stand that pales in comparison to anything else they've ever had with anyone else, but it's not a coming together that makes them realize they're meant to be or anything like that. It does, however, have one consequence, and while Willow helped bring his band notice that turned into demand, now she needs Luke to help her rescue her career from imploding. All she needs is one year, lovey-dovey content, and a seemingly picture-perfect family with the baby they created during that unforgettable night, and he gets a million dollars for his hard-earned efforts. Everyone wins, but what if they lose their hearts in the process?
I admit it. I'm a sucker for Scarlett Cole's books, but can you really blame me? I mean, her characters and stories grab a hold of my heart and refuse to let go. Latest case in point: Luke and Willow's story. Gah! These two were irresistibly endearing, and while they don't necessarily have the sort of meet-cute that's GP-rated and super swoony, they've got an undeniable connection. I liked that they had their struggles and that they needed to work towards creating a relationship as a couple because it made the journey towards their happy ending far more worthwhile and gives me a better appreciation for them. I seriously wanted to hug them both, especially given that their back stories regarding their respective families were not easy. Seeing how far Luke has come here from the Luke that we had in the first two books has me bumping him up to my favorite among the Sad Fridays guys--sorry, Matt, Jase, Alex, and Ben!--but we've still got two books to go, so you never know. Awe-inspiring character and story development has me giving How Good It Was five-plus stars.
Release Date: 22 February 2022
Date Read: 21 February 2022
Learn more about Scarlett Cole.
Pre-order How Good It Was on Amazon | Apple Books | B&N | Kobo.