Review: What If It's Right? by JB Heller 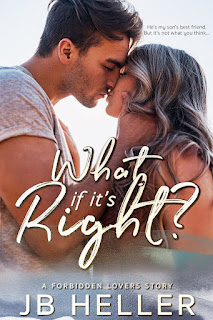 Note: An advance reader copy (ARC) was provided by the author.
When I started reading this book, something about it felt familiar. It wasn't until I'd finished that I did a quick search on my blog and realized that I'd already read it back in November of 2016! Talk about a total smack-my-head moment. I usually do searches prior to reading a book, but alas, I didn't this time around. The blurb called to me, especially because I'm a sucker for a reverse age gap romance. Now, it's been over five years since I read What If It's Right? and based on my perusal of my previous review, it looks like my feelings over the book have shifted a tad. Think of it as my experiencing a book with a fresh and more refined perspective.
What If It's Right is penned by JB Heller, and it was my first and remains my only read from this author, and this is mainly due to there being so many books and me having so little time to read everything I wish could. This is the story of Victoria Dixon, who at eighteen becomes the legal guardian of her eight-year-old nephew, Finn, after they survive the same car crash that kills her sister/Finn's mom. Tory forges a friendship with Vera Banks while Finn does the same with Vera's son, Weston, who is the same age as Finn. Over the years, that bond is fortified, but what happens when Wes comes of age and decides that his feelings for Tory are far from platonic? The ten-year age difference, Tory being Finn's mom, and Tory's friendship with Wes's mom are just a few of the issues that Tory is faced with. Are her own feelings for Wes worth taking that risk?
Tory and Wes's story plays out more in moments than in one continuous flow. This does take away a bit from a greater enjoyment of the book, as well as me having more of an emotional investment in what happens between the main characters. We get both of their perspectives, although Tory's more than Wes's, which is something that I appreciate because you see the conflict that Tory has and have a better understanding of what Wes is thinking of. Because of how it's written, it's almost as if it has a start-and-stop feel to it. To be fair, I did like What If It's Right when I originally read, based on what's in my review from five and a half years ago. It's still a pretty good read now, but I think a bit of spit and polish would've made it even better. 3.5 stars.
Date Read: 15 February 2022
Learn more about JB Heller.
Purchase What If It's Right? on Amazon.