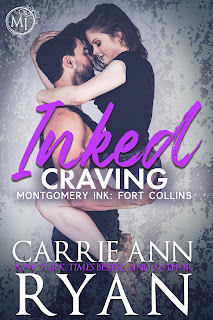 Note: An advance reader copy (ARC) was provided by the author via Give Me Books Promotions.
Carrie Ann Ryan's Montgomery Ink book universe is like the gift that keeps on giving! Montgomery Ink: Fort Collins is the latest spin-off and Inked Craving is the fourth novel in this particular series. Paige Montgomery is the youngest among the siblings in the branch of the Montgomery clan, and she has dreams of marrying the man she loves and creating a family together. But instead of a marriage proposal and walking off into the sunset, her boyfriend tells her about a job opportunity in New York and walks away from her. To complicate matters further, Paige learns she's pregnant with his baby. She doesn't want to be a burden to anyone in her family, but when her brother's best friend offers himself as someone she can lean on, Paige reluctantly agrees. She may have had a crush on Lee Grier years ago, but she's not willing to put her heart on the line for any man. All she wants is to be there for the baby she's carrying, yet resisting the pull between her and Lee isn't easy one bit. How long can they choose to not acknowledge their reality and everything between them?
I loved this book! It had elements of friends-to-lovers, falling-for-your-best-friend's-sibling, and even a surprise pregnancy but with a twist. I liked seeing how Paige and Lee went from being friends tied together by her brothers, especially Benjamin, to having their own bond and then slowly but surely feeling more for each other. Paige was someone who was determined to show that she was strong and independent, but kudos to Lee who didn't want to simply sit one the sidelines and to her close-knit family and relatives for giving her space but reminding her that they were there for her. This was very much a slow burn romance as well, and Carrie Ann Ryan wrote this in a way that didn't make it feel as if events were playing out at a snail's pace. Can I also just say that Paige's ex, Colton, tempted me to smack him upside the head while also patting him on the shoulder because of his cluelessness. Paige definitely deserved someone better in her life, and that, of course, was none other than Lee. I'm giving Inked Craving five stars and counting the days till Archer's book!
-------------------------
Read my reviews for the Montgomery Ink: Fort Collins series: