Review: Up in Arms by Kindle Alexander 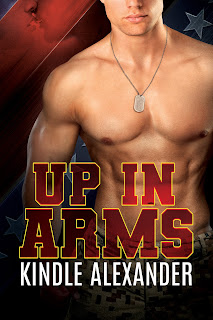 Note: An advance reader copy (ARC) was provided by the author via Enticing Journey Book Promotions.
Originally released about nine and a half years ago, Up in Arms has been tweaked and given a new cover. If memory serves, I do believe this is Kindle Alexander's debut novel. I could be totally wrong, which wouldn't be all that surprising. I never got to read the original version of this standalone, so I cannot pinpoint whatever changes may have been made in this new edition.
Up in Arms is the story of Reed Kensington, a twenty-nine-year-old lawyer from a prominent family and self-made millionaire in his own right, and Trevor West, a twenty-three-year-old Marine and one of Reed's younger brother's best friends. Reed is immediately smitten, but Trevor doesn't think himself worthy, especially after a covert mission irrevocably changes them.
Kindle Alexander is one of those authors whose stories just click with me. There's that addictive combination of angst, romance, and tension that I've come to expect. With this re-release, the blurb definitely had me eager to dive in. I mean, come on, it's a military romance! But while I did like the main characters, I hate to say it, but their story fell short of my expectations.
Reed was such a great main character, and Trevor was someone who came into his own as the story progressed. Where the book falters, though, is that everything happens in such a short period of time and it takes a minute to even consider all the events being somewhat plausible. Still, I loved the sweet and steam and that epilogue was swoony! Four stars go to Up in Arms.
Date Read: 24 February 2022
Learn more about Kindle Alexander.
Purchase Up in Arms on Amazon.