Book Spotlight: The Night She Went Missing by Kristen Bird 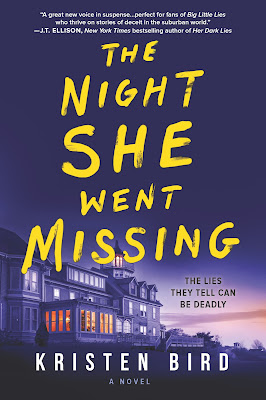 The Night She Went Missing
by Kristen Bird
Date Released: February 8, 2022
MIRA Books
About The Night She Went Missing
“A great new voice in suspense...Perfect for fans of Big Little Lies who thrive on stories of deceit in the suburban world.”
—J. T. Ellison
New York Times and USA Today bestselling author of Her Dark Lies
An intriguing and twisty domestic suspense about loyalty and deceit in a tight-knit Texas community where parents are known to behave badly and people are not always who they appear to be.
Emily, a popular but bookish prep school senior, goes missing after a night out with friends. She was last seen leaving a party with Alex, a football player with a dubious reputation. But no one is talking.
Now three mothers, Catherine, Leslie and Morgan, friends turned frenemies, have their lives turned upside down as they are forced to look to their own children—and each other’s—for answers to questions they don’t want to ask.
Each mother is sure she knows who is responsible, but they all have their own secrets to keep and reputations to protect. And the lies they tell themselves and each other may just have the potential to be lethal in this riveting debut.

An Excerpt from The Night She Went Missing
They find me faceup in the murky water of the harbor on the day of my funeral. Or memorial service. Whatever. It’s not like there’s much difference. Dead is dead.
Except I’m not. I. Am. Not. Dead. I would pinch myself if I could move.
“Can you hear me? Hey, what’s your name? Can you open your eyes?”
My eyes are as dense and heavy as basalt. Basalt: rich in iron and magnesium, Mr. Schwartz penned on the board during our volcanic rock unit in eighth grade. I fight to come out of the emptiness that has held me for the past…the past what? Hours? Days? Weeks?
I attempt to whisper my name even though my eyelids remain anchored. Emily. That’s right. Emily. I can’t remember the last time I voiced those three syllables.
“Pull her up.”
Hands yank at me, jerking me from the arms of the water. Two hands wander up my body—over my feet, my legs, the arch of my hips, my arms, onto my neck, stopping at my forehead. This touch is not like the familiar plying of the boy I love, so fiery that it almost stings. This touch is necessary, cold, perfunctory. Perfunctory, Mrs. Abbot, my sophomore English teacher had pronounced for us students as we learned the word for the first time. P-E-R-F-U—
The voice cuts in. “Tell them we have a girl, a teenager. No broken bones as far as I can tell but looks like she’s been out here for hours. Unconscious, but breathing on her own.” His voice muff les as he turns his head. “I think she might be Emily.”
Suddenly, a brilliant choir of tenors and baritones and basses burst forth. “The Emily?”
Emily. Yes, that’s me. What a comforting thing to hear one’s name spoken by those who can point the way home. I breathe in gratitude and descend into the lightness of sleep before a hand touches my cheek again.
“You awake, Emily?”
The swooshing of the waves calls to me, a reminder that the song of the deep is steady despite all the new sounds: The bustle of work boots, the hum of the boat waiting to churn to life and set out across the open sea.
“Your mama’s been looking for you, Ms. Emily. You gave us all a fright. You hear me?” The man seems to sense that I can hear his words while my body remains frozen despite the warmth of the water and the sun overhead. “You’re gonna be okay, sweetheart. Yes, ma’am, you’re gonna make it just fine. Got a daughter about your age, and I woulda been worried sick if my girl had gone missing for weeks on end. Your mama sure is gonna be happy.”
A nasally voice now. “Where you think she’s been all this time? Turned into a mermaid?” The boy chuckles.
“Hush, Beau.”
The man’s hand touches my forehead, his fingers sandpapery with callouses. “Now, sweetheart, if you can open your eyes for a sec, I can introduce you properly to the crew. We’re getting you help as fast as we can, but you can go ahead and open them eyes before all the medics arrive. They’d be good and relieved to see you looking around.”
I try. Oh, how I want to flicker them open, but my head aches and oblivion pulls harder. The siren call of the void is too tempting to resist.
Excerpted from The Night She Went Missing by Kristen Bird
Copyright © 2022 by Kristen Bird.
Published by arrangement with Harlequin Books S.A.

Kristen Bird lives outside of Houston, Texas with her husband and three daughters. She earned her bachelor’s degree in music and mass media before completing a master’s in literature. She teaches high school English and writes with a cup of coffee in hand.
In her free time, she likes to visit parks with her three daughters, watch quirky films with her husband and attempt to keep pace with her rescue lab-mixes. The Night She Went Missing is her debut novel.
Connect with Kristen
Website | Facebook | Twitter | Instagram | Goodreads