Review: The Commander by Melanie Moreland (Men of Hidden Justice #3) 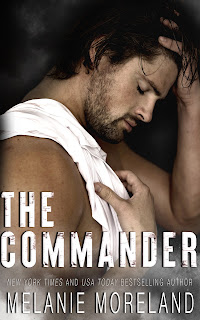 Note: An advance reader copy (ARC) was provided by the author.
Thank goodness Melanie Moreland went ahead and wrote The Commander because I've been curious about Julian Grayson from the get-go. This is the third and final book in the Men of Hidden Justice series, and while it can be read as a standalone, I highly recommend that the series be read in order: The Boss, Second-in-Command, and The Commander. There are recurring characters and continuing story line of sorts, which I won't go into because hello, spoiler-ville. These are all romantic suspense reads, and fantastic ones at that!
Julian Grayson is a man on a mission, and he's taken his purpose in life to heart, enough that there isn't much space left for anything else. But then Taliyah Wells steps into his office. She's applying to be his secretary, but there's something about the twenty-eight-year-old art degree holder that piques his curiosity. She's ten years Julian's junior and it looks like she's keeping secrets, but then so is Julian. They fall hard for each other, but when Tally learns what Julian's been hiding, she runs. When he finds her again, there'll be no letting go...
It took someone like Tally to break down Julian's walls, but while falling for one another was easy, staying together was a whole different matter for these two. I loved their chemistry and I appreciated that their journey led to a hard-earned but very much deserving happily-ever-after. Just like its predecessors, The Commander had a great blend of romance, mystery, and suspense. Melanie Moreland rose to the challenge and delivered a memorable series with her Men of Hidden Justice books. The Commander receives five stars.
--------------------------
Read my reviews for the Men of Hidden Justice series: