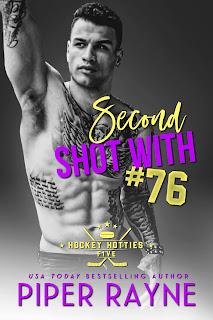 Note: An advance reader copy (ARC) was provided by the authors via Valentine PR.
Second Shot with #76 is the fifth novel and seventh addition to the Hockey Hotties series from the writing duo of Piper Rayne. Cory Freeman is a rookie waiting for his shot to prove himself on the ice. That's easier said than done considering that Aidan Drake, Florida Fury's first-line center, was blazing his way to the top, leaving little chance for Cory to get on the ice. So, while he's biding his time, he's taking the advice of some of his teammates and playing the field when it comes to the opposite sex. The last thing he needs is to be distracted by a relationship, but then he learns that Ande Evans is in Florida. Their fling in the tropics made an impact on both of them, but she ghosted him, and he decides the best way to get her out of his head is to sow his wild oats. But Ande's a game changer and Cory wants his second shot. The question is, does Ande want one with him or is she playing a different game?
Cory and Ande made quite an impression on me after reading Tropical Hat Trick, so I had high hopes when I learned that they were getting their own full-length story. I'll be honest, I was expecting more of an oomph because these two had such a strong connection in the novella. Here, the connection was still there, but it felt muted somewhat. That isn't to say that it wasn't an enjoyable read, because I was most certainly entertained and I liked that there was that touch of originality with how Cory and Ande would make a go of dating and committing to a relationship. As far as the hockey part of the story goes, I liked how everything played out and seeing Cory get his shot. The usual suspects, aka the past couples and other Fury players, were ever-present, but I must admit that I'm really excited for Kane Burrows's story, which'll close out the series. I'm Second Shot with #76 giving four stars.
---------------------------
Read my reviews for the Hockey Hotties series: