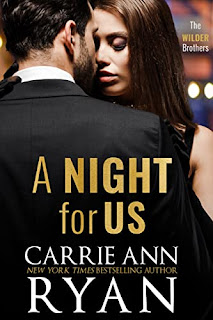 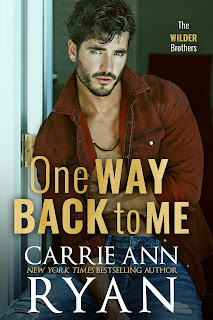 Note: An advance reader copy (ARC) of the novel was provided by the author via Give Me Books Promotions. The novella is a personally owned copy.
Carrie Ann Ryan's got a brand-new series that features a new family, albeit one that has ties with her beloved Montgomery clan. The Wilder Brothers series is all about six brothers who are former military turned resort owners--Eli, Evan, Everett, East, Elijah, and Elliot. Their sister, Eliza, who is the only girl and the youngest among the brood, got her happily-ever-after in Inked Obsession, which is the second book in the Montgomery Ink: Fort Collins series. Set in Texas, the series kicks off with a free prequel novella, A Night for Us, and continues Eli's story in the full-length One Way Back to Me.
It's been two years since Eli Wilder saw Alexis Lane--two years since they shared one dance at a wedding. They felt a connection, one that had to be left unexplored when her boyfriend proposed to her soon after that dance. Now, Eli and his brothers are in need of a wedding planner for Wilder Resort and Winery, and the best candidate for the job is none other than Alexis. That spark between them is still as potent as ever, but neither one can afford to explore it. She may no longer be in a relationship, but she now works for and with him. Do they keep things professional or do they take the second chance that fate has given them? What happens when Alexis's past comes for her and threatens the new life she's creating for herself and Eli?
This series has gotten off to a rather strong start, if I do say so myself. We get Eli and Alexis's romance while also getting glimpses of the five other Wilder brothers, plus Eliza makes her presence felt. The main characters were easily likable, and while they did have chemistry from the moment they had that dance a couple of years back, I think they were far more prepared to actually have a relationship after going through some stuff. There's also a bit of an age gap--he's thirty-seven, she's thirty--but it wasn't a point of contention for them. The rivalry with Dodge Family Resorts, which looks to be a continuing story arc, but I'm quite curious about LJ Dodge, who was the non-jerk member of that family. OF course, I'm also looking forward to seeing more of the other Wilders as the series continues. Four stars for A Night for Us, which is currently free, and 4.5 stars go to One Way Back to Me.
Release Date: 18 April 2022
Date Read: 14 April 2022
Learn more about Carrie Ann Ryan.
Download A Night for Us for free on Amazon | Apple Books | B&N | Kobo.
Purchase One Way Back to Me on Amazon | Apple Books | B&N | Kobo.