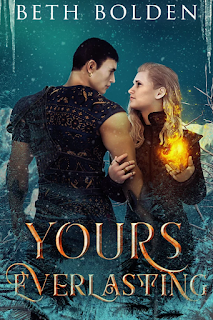 Note: An advance reader copy (ARC) was provided by the author via Neon Rainbow ARC Reviews.

"I could never understand how, or understand why, until I finally accepted that there is no logic and reason in the heart, at least not my heart. Because it is yours, as I am yours, from that winter, for hundreds of years, until now. As long as you wish me to be near you, to be close, to be your friend, and your bed mate, to protect you and the peace you've created, I am yours."

In 2019, I read Beth Bolden's M/M fantasy romance standalone, Yours, Forever After, and it became one of my top favorite reads of the year. It also remains my most beloved among all her books that I've read. Now, Bolden returns to that world she created two and a half years ago with the second story in her Enchanted Folklore series, and I confess, I was a wee bit worried. After all, its predecessor swept me off my feet and had me smitten when I read it and then again when I listened to the audiobook last year. But Yours, Everlasting was everything and more, and goodness me, but how this love story took me back to a place I'd already loved, except this time, it gave me new things to see and fall in love with. While this new book works well enough as a standalone, I am highly, totally, absolutely, undoubtedly recommending you read Yours, Forever After first.
Once upon a time, Evander was one of thirteen Guardians serving as the Conclave living together in the Castle on Top of the World. He was the Guardian of Secrets, but one act of betrayal by one his brothers--one of his fellow Guardians--led to his banishment to the surface. In the last thousand years or so since then, he's dedicated himself to ensuring that any sort of malevolent magic is gone, no longer becoming a threat to humans. He's shifted into the King of Unicorns, Evrard, and bearing the name Rhys, has served as royal adviser to King Grayson and King Emory. Everything is as it should be...except...Evander is...bored. And maybe that's why we he finds out that his past is making its presence known for the first time since he was stripped of his powers and pushed out of the Conclave, he can't resist its lure. Even if Marcos, Guardian of War, happens to be part of that past. With secrets being divulged, can Evander do everything that is necessary to defeat the evil that threatens all of humankind--the same evil that threatens the Conclave from within?
This book was enthralling to say the least! I loved finally getting Evander's story. He was such a source to be reckoned with in the first book as Evrard and Rhys, and now, readers get to find out what it was that led him to the surface. I think that Marcos was the perfect partner for Evander, and while it may have taken some time--a millennium!--for Evander to realize just how deeply Marcos felt for him, once that dawning began, there was no stopping it. Aside from the romance, there was suspense and mystery, and all that wondrous and fantastical aspects that made for such a darn enticing story. Of course, I adored seeing Gray and Rory and all the usual suspects from the series starter, and seeing how far they've all come warmed my heart. I really hope that we get more from the Enchanted Folklore series, because Beth Bolden has created this lovely world that demands to be revisited time and again. Yours, Everlasting is a 2022 favorite and garners five-plus stars.
------------------------
Read my reviews for the Enchanted Folklore series: