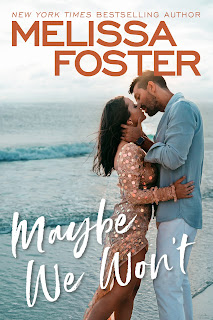 She tried not to respond, to hold back the feelings stacking up inside her, thundering through her body, clawing for release. This was only a fling. She wasn't supposed to feel so much, but it was torture holding it in. He lifted his face, his eyes brimming with emotions vaster and deeper than the sea. She wanted to dive into them, to drown in them, and the truth broke free. "Yes. I feel it, too."

I've been eagerly awaiting Deirdra de Messiéres and Josiah "Jagger" Jones's story ever since the prickly workaholic of a lawyer and the free-spirited musician and chef caught sight of one another in the first Silver Harbor book, Maybe We Will. Well, Melissa Foster made the wait worthwhile because Didi and her hippie have one heck of a hot and heartwarming journey to their happily-ever-after in Maybe We Won't. Thirty-year-old Deirdra--Dee to her family and loved ones and Didi to Jagger--has surprised everyone on Silver Island by actually taking a break from her busy life in Boston. Being passed over for a promotion she worked her butt off for and knows she deserves had her making the snap decision of going on a two-month hiatus, not that she thinks she'll actually spend a couple of months away. Nope, she's positive her boss is going to see the error of his ways and realize just how much he needs her. She's in no mood for any sort of distraction--even if it comes in the form of the easygoing hippie five years her junior. Jagger sees something in the woman he calls Didi--a part of her that she's long ignored and would prefer to keep forgotten. All it takes is a bit of prodding and the temptation of being free for Deirdra to give in to Jagger--to give in to her personal wants and passionate needs. The thing to keep in mind is that this is nothing more than a fling, because Deirdra and Jagger are different people headed in opposite directions, and no future will ever possibly await them. Right?
I have loved the journeys these three sisters--Cait (Maybe We Should), Deirdra, and Ava (Maybe We Will)--have undertaken ever since their mother, Ava, passed away. Theirs has been a story of love, family, grief, and forgiveness, but each one has experienced these in their own ways. For Deirdra, there was a great deal of resentment and anger directed at their mother, and while there were always bits and snippets in the first two books as to the responsibility placed upon her shoulders after the death of her and Ava's beloved father, my heart ached in empathy when we learn more of what she went through. I think that having someone like Jagger, who was not exactly what I would call an outsider per se but more of a person who wasn't born and bred on Silver Island, ensuring Dee that he was ready and willing to listen without judgment allowed her to be more open to seeing aspects of her life from a fresh and impartial yet caring perspective. Seeing Dee transform into the most authentic version of herself felt like such a privilege. I say that because she was someone who only showed people what she wanted them to see, but then along came her hippie who made her realize that she was a woman worthy of love and that home isn't always a place. This book did my heart good. It was a reminder of the things that matter most, and that at times, when we think that a plan has gone awry, it may be a blessing in disguise. Melissa Foster has done it again. Five-plus stars go to Maybe We Won't.
-------------------------
Read my reviews for the Silver Harbor series: