Review: Mine to Keep by Jen Talty (Safe Harbor #1) 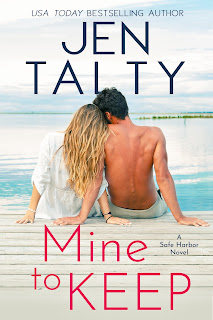 Note: An advance reader copy (ARC) was provided by Lady Boss Press via Grey's Promotions.
Jen Talty is a new-to-me author, and Mine to Keep is my first read from her. Published by Kristen Proby's Lady Boss Press, this is the first in Talty's new Safe Harbor series and is set in the small town of Lighthouse Cove, Florida. Brynleigh Tinsley is a thirty-three-year-old woman who wants nothing more than a place to call home--a safe harbor where she can be a mother to her daughter, Zadie, and forget about her past. What she doesn't require at the moment--or anytime soon, for that matter--is a firefighter who's just volunteered to be her at-call handyman. What thirty-seven-year-old Jamison Kirby hopes for, however, is more--more time with Bryn and Zadie, more trust from this woman who's quickly become someone who means a great deal to him, and to simply be more than a friend. Jamison would love nothing more than to have Bryn and Zadie for keeps, but the past that Bryn wants to forget has always remembered. Now, it's back.
This was both an enjoyable beginning to the series and a strong introduction to Jen Talty's writing. I loved the element of suspense amidst all the romance. Even though it was clear who was after Bryn, I liked the thrum of anticipation, because you know they were going to make their presence known and make her pay for whatever her perceived sins may have been. As far as Jamison's issues with his mother and brothers were concerned...well...let's just say that I wasn't a fan of his mom's. At all. There's being mothering, and then there's smothering. There was also all that pressure Jamison was getting from almost all sides with regards to the whole Steve thing. It was almost as if they were all discounting Jamison's feelings and just wanted him to get with the program. Sigh. But hey, that's just me. Other than that, I seriously liked the romance between Bryn and Jamison, and I loved that we see their relationship flourish over time. Four stars go to Mine to Keep.
Release Date: 05 April 2022
Date Read: 02 April 2022
Learn more about Jen Talty.
Pre-order Mine to Keep on Amazon | Apple Books | B&N | Kobo.