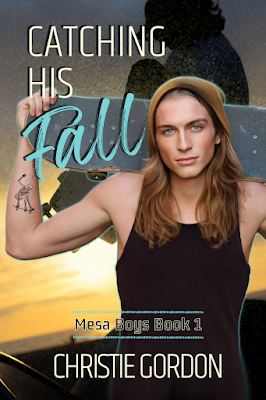 Catching His Fall
(Mesa Boys #1)
by Christie Gordon
Release Date: April 8, 2022
About Catching His Fall
Max has a plan. Tanner doesn’t do plans. Plan or not, they’re better off together.
Max Thompson has a few problems. He’s spending too much time at the skatepark watching a mysterious, unattainable young man he refers to as skater boy. Meanwhile, his college fund is running dry in his senior year at Arizona State University and it’s time to find a roommate to help with expenses. Hopefully one that’s not too weird this time. He’s spent his college years staying away from love to focus on school, but he can’t get skater boy out of his head.
Tanner Donahue is a hardworking assistant manager at a grocery store, who likes to skateboard and play guitar in a cover band in his spare time. But Tanner has his own problems. The first being the fact that he hooked up with and fell for his roommate and coworker, who has decided a relationship with a guy is not what he wants. It’s time for Tanner to find a new place to live and learn from his mistake.
When Tanner shows up on Max’s doorstep with his guinea pig, Stan, hoping to rent the room Max has available, Max jumps at the chance. Max soon realizes he’s going to have to walk a fine line if he’s going to make Tanner his own while living together. It doesn’t help that Tanner’s old roommate wants him back, and Tanner’s family situation is complicated at best. As truths are revealed and problems pile up, can Max and Tanner navigate what’s thrown at them to come out together?
Catching His Fall is a roommates to lovers, opposites attract romance with an HEA and no cliffhangers. It features a determined college student and a bad boy skater with a heart of gold who only wants to please. This is book one in the Mesa Boys series. Each book features a different couple. 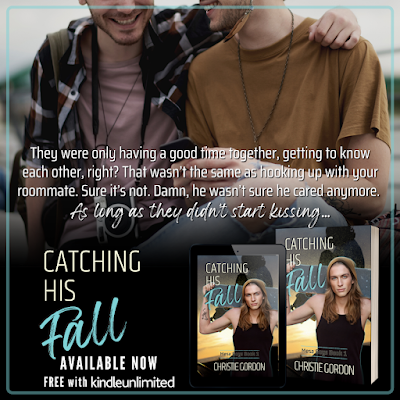 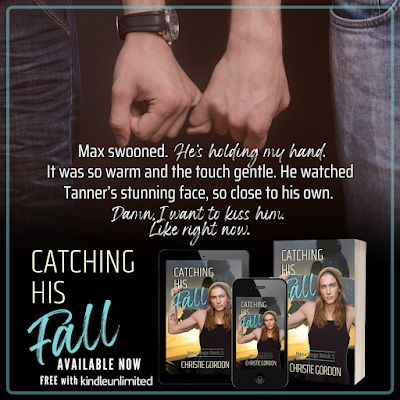 An Excerpt from Catching His Fall
As Max opened the door on the condo and stepped inside, he took it all in. “Oh, my God. Look at the view.” He rolled his suitcase passed a dark-wood kitchen with stainless-steel appliances and black granite counters, then into a room with a glass and iron dining table and a modern, wrap-around sectional couch in dark green with colorful throw pillows. He stopped at a wall of windows and sliding glass doors, leading to a wrap-around patio. The ocean spread out in every direction, white caps twinkling in the deep blue as if they were stars in the sky.
Tanner stepped to his side and gazed out the patio door. “I can’t believe it.” He beamed.
Max wrapped an arm around his shoulders and planted a quick kiss on his cheek. “I’m so glad we could be here together.”
Tanner’s gaze met his. “Yeah, me, too.” He opened the patio door, his long, sun-bleached hair billowing out behind his head, and stepped out to an iron railing with Max following. “Holy fuck. Look at that, two pools?”
Max looked over the grounds, some ten stories below them, and grasped the iron railing. Two large pools fed into a circular pool bar cabana. Grass and palm trees made up the landscaping and beyond it all, a set of palapas lined up across the beach. “You ever watch Bachelor in Paradise?”
“What?” Tanner creased his brows.
“Jesus, Max, don’t tell him you watch that. He might find a new boyfriend.” Josh chuckled, sidling up to the patio rail.
“Shut up, you.” Max snickered, dipping his head a moment. “This place reminds me of where they film that show. They put all these couples on the beach and film them pairing up, then breaking up. It’s very dramatic. Anyway, they film that somewhere in Mexico, too.” He studied Tanner.
Tanner stared at him. “You uh, watch The Bachelor?”
Max faced him. “No, if you must know. I watch The Bachelorette sometimes. The guys are hot.” He lifted his chin. He would not be embarrassed about this.
Tanner smirked. “You’re not watching that anymore.”
Carter walked out onto the patio. “Uh-oh, Tanner’s getting his jealous on.” He snorted. “Bet you’ve never seen his jealous side, huh, Max?” Carter slapped Max’s arm.
Max let a wide smile grace his lips, focusing on Tanner’s large, hazel eyes, the flecks of green and brown glinting in the sunlight. No, he’d never seen it and Tanner had no reason to be jealous. “I don’t need to watch it anymore. I have you.” Max placed his hands on Tanner’s cheeks and gave him a long, deep kiss.
Tanner’s chest swelled with the intensity of the kiss, then he grabbed Max’s hips and pulled them close.
“Go do that in your own bedroom.” Carter scoffed, waving his arm, then stomped into the condo.
Josh tsked. “At least get unpacked first.”
Max broke the kiss, searching Tanner’s face. Tonight was the night. There would be a full moon, and everything would be perfect. “I suppose. Let’s get unpacked, so we can get down to the pool bar and the beach.”
With a grin, Tanner brushed his fingers over Max’s cheek. “Let’s do it.” 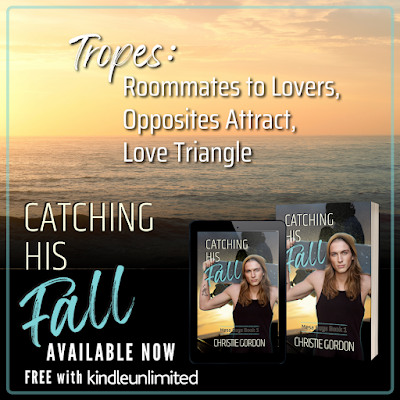 About Christie Gordon
Christie Gordon started writing gay and M/M romance fiction after becoming preoccupied with anime and in particular, the boys love and yaoi genres. She’s always had stories in her head and always enjoyed writing, so she took up fiction writing classes at a local community college and published her first book with eXtasy Books back in 2009. Christie likes to write complicated characters with painful pasts that refuse to be ignored until the characters are forced to face them head on. Angst? Yes. Happily ever after? Always. It’s the struggle to get there that counts.
Christie’s day job is in the high-tech industry with a Bachelor of Science in Electrical Engineering and a Master’s in Business Administration. She currently lives in the Phoenix, Arizona metro area and enjoyed eight years in the Bay Area of California but grew up in Minnesota. She shares a home with her partner of twelve years, a musician by night and a coder by day, who is currently in three bands, giving her plenty of time to keep writing. She is also a mother of two sons, one currently in college for engineering and the other preparing for nursing college. Her one-eyed, rescue pug is always by her side, snoring the day away.
Connect with Christie
Website | Facebook | Twitter | Instagram | YouTube | Goodreads | BookBub | Amazon | Newsletter