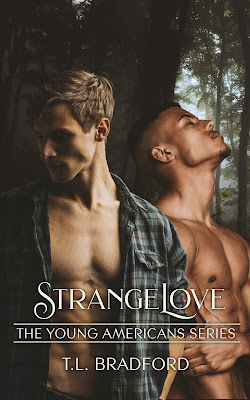 StrangeLove
(Young Americans #3)
by T.L. Bradford
Date Released: April 17, 2022
About StrangeLove
Archer
The year began great for me.
Became the starting quarterback for an NFL team - check.
Secured a multi-million-dollar contract - check.
Moved to LA and lived the glamorous life - check.
What could possibly cause me any issues?
Oh yeah, one more thing. I'm gay.
I was outed a couple of years ago to my former team and my family, but it hasn't been made public knowledge yet. Well, that is, until now. I'll be known as the first LGBTQ+ active player in the league's history. And if I stick to the conditions of my contract, it won't be a problem. The thing is, I'm not really a guy known for playing by the rules.
Most people think of my personality as the three B's: bold, brash, and blunt. My mouth has gotten me into more predicaments than I can count. Even my best friends have told me I'm stubborn as a mule and have the delicacy of a bull in a china shop. This presents a big problem for me because I have my eyes set on winning over the guy who stole my heart years ago, only he doesn't know it yet.
Getting his attention is going to be challenging. It's a good thing I'm tenacious.
Unfortunately, it's not great timing and could get me into a whole mess of trouble.
Why does falling for a guy need to be anyone's business but mine?
Kai
The past couple of years were a whirlwind of activity. My career took off after my guest shot appearance in Americana. I appeared in a few indie features and finally got a shot at my first major motion picture release. The work came as a great distraction from my personal life, which took a further nosedive after I found out the guy I was falling for had already fallen for someone else.
Why should I be surprised? He was another in a string of failed relationship attempts. I swore I wouldn't get involved with anyone else, choosing to stay focused on my career instead. That is, until the force of nature known as Archer McMillan came storming into my life.
To be the pursued instead of the pursuer was not in the cards. To top it off, he's everything I'm not. Yet, there's something to be said for a guy who can make you laugh when it's the last thing you want to be doing. I'll admit he's got a playful and determined spirit. Archer also has one of the biggest hearts of anyone I've ever known. Not the mention the cute way he… Hold on. What am I doing? We cannot be a thing. Nope. Not gonna happen. Ever. Right?
Follow Kai and Archer as they cross the lines as friends, partners-in-crime, and confidants, to discover a love beyond boundaries that needs no definition.
(StrangeLove is a funny, heartwarming, slow-burn love story. It contains a cast of fully developed characters that encounter romance, laughter, and life lessons. It contains adult language, mature themes, and is best enjoyed by those over the age of 18. It can be read as a standalone; however, if you would like to know the backstories of some characters, check out the prior books in the series.) 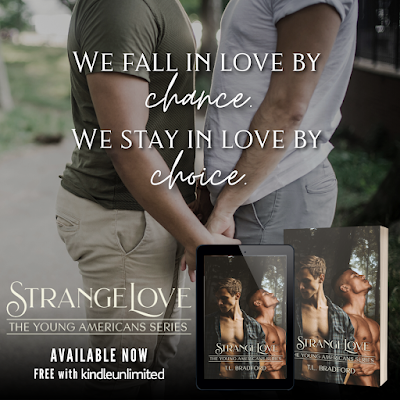 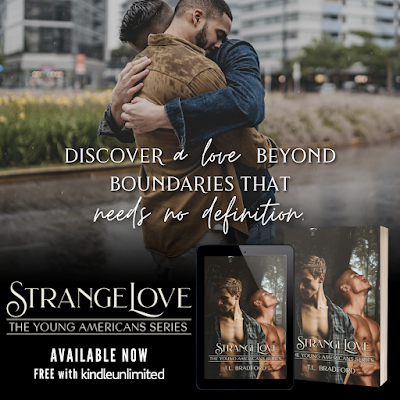 An Excerpt from StrangeLove
From the speakers are the strains of a classic, lush, seductive Rumba.
“Today we’ll work on body fluidity.”
“This sounds like fun. I’m all for fluidity.” His tongue-in-cheek comment makes me laugh. He’s in a good mood today. I want to keep it light and playful.
I move across the dance floor apart from him, striking the first pose position of the dance. I know he’s confused. In an impromptu decision, I want to show him the true magic of the dance.
I bend and curve my body to the beat, placing extra attention on the movement of my hips. I want him to feel comfortable moving his body in a way he’s not used to.
Most men who’ve been brought up straight are guarded against exaggerated movements of their bodies for fear of being perceived as homosexual. Archer’s no exception. He’s fantastic at learning the basic moves, probably because he must remember so many plays from football. His hip motion skills need work.
I demonstrate with my own body the movements I want him to copy.
“There’s no way on earth my hips can do that.” He points at me, incredulous I would ever ask him to do such a thing.
“It’s not that hard. It’s all perception. You’re mentally locked up, believing you’re not supposed to move this way. But you can and you do.”
“I do?”
“You’ve had sex, right? It’s the same thing. Movement and rotation. Push and pull. In and out.”
He shifts uncomfortably a bit on his feet. My words were deliberate. I want his mindset to be sexual.
“This is vertical.”
“You’ve never had sex standing up?” I ask coyly.
His face turns bright red. It’s a feat to catch Archer at a loss for words.
“That’s all the dance is, vertical sex.” I continue to move my body suggestively, coming closer to him.
When I get close to him, I see his Adam’s apple bob. He swallows hard.
He tries to grab me, but I remind him, “We never cross the line and enter each other’s space. It’s all about the sexual tension. The longer we hold off, the bigger it builds.”
He stands stock still as I writhe and undulate around him.
“Something’s building alright,” he mutters.
In his pants. I imagine.
I stop teasing him and focus on the task. “You be lead. I want you to seduce me with your motions. Tempt me. Intrigue me to want to follow you anywhere.”
I place my hand on his shoulder. He puts his hand on my waist to guide me.
It’s like I see a flip switch in him. He starts taking the guidance seriously. He puts his effort into focusing on me.
We start the game. Predator versus prey. He comes for me. I pull away.
We move together about the dance floor as music plays from the sound system.
It’s only when he entices me with his hip movements that I respond to his call. If he wants me, he’ll need to work hard for it, properly completing the steps.
He’s never one to be outdone, catching onto the game. His posture straightens, he tightens his grip around me, and he looks directly into my eyes, no longer at his feet.
He parades me around the room, then without my prompting, goes into an underarm turn. He doesn’t miss a step.
My shocked look delights him, and he presses on further, tying together all the tips and tricks I’ve taught him over the last few weeks.
I can’t believe my eyes. He was paying attention the entire time. He only needed a little push to remove the scared self-awareness.
Though we stand nearly eye to eye, today he seems so much larger, dominant in his lead position.
One. Two. Three. Four.
He doesn’t miss a beat, determined to win me over, giving everything he’s got.
We’ve never practiced a dip, but Archer supports my back, leaning me over gently.
He stays in that position after the music has faded away, eyes locked on mine.
“Permission to enter your personal space?” he asks.
“Permission granted.” 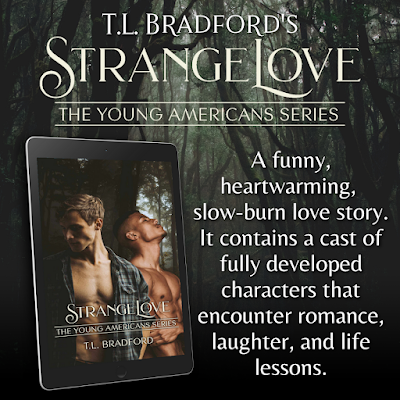 T.L. Bradford always hated math, so it was a good thing she had a way with words. Since she was a shy and quirky kid; words were her best friends. She would imagine entire worlds in her head and talk to herself endlessly. Her mother wondered if she was speaking with ghosts for a while.
Her older sister was a voracious reader of trashy romance novels and would pass them down to her after she had finished them. T.L. was the only 10-year-old kid sitting in class reading "The Stud" by Jackie Collins during reading time. Oddly enough, she never got called out on it.
As she grew older, her tastes evolved, but one thing held fast; her undying attachment to love stories. One day out of the blue, she decided to write the love stories she always wanted to read instead of searching for her story. Since then, writing has been a dream fulfilled for her and she could not be happier.
She enjoys writing about love, regardless of gender and is a proud supporter of the LGBTQ community.
T.L. calls the Pacific Northwest her home and enjoys the quiet rural life of her little oceanside home with her playful/crazy husband and their giant dog Noah.
Connect with T.L. Bradford
Website | Twitter | Instagram | Goodreads | Amazon 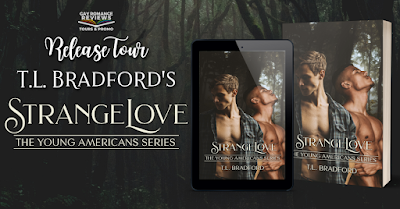