Audio Review: The Potter by Kristy Marie, narrated by Heather Firth & Connor Crais (In the Hands of the Potters #1) 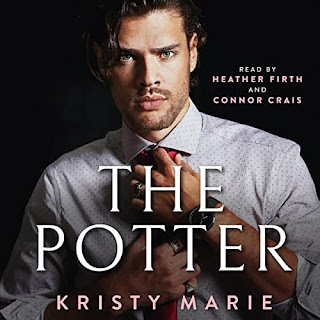 Note: The audiobook was provided by the author.
I've read a number of Kristy Marie's books in the past, but The Potter marks my first foray as far as her audiobooks are concerned, and I cannot say enough good things about it! Narrated by Heather Firth, who is a new-to-me narrator, and Connor Crais, whose voiceover work I've enjoyed in the past, I loved re-experiencing this story which brings together a gifted surgeon who specializes in reconstructive surgery and an aspiring actress who needs his help. Vance Potter (35) was broken, traumatized by one incident that cost him more than he could have ever thought possible; and Halle Belle (23) was scarred, believing the one person who could turn things around for her career was the second oldest Dr. Potter of Potter's Plastics. These two had the whole push-and-pull type of tension that I love in books like this. She gave as good as she got, and it was that tenacity of hers that I loved. As for Vance, hearing him go from who he was when he was first introduced in the story to who he became, not just with Halle but with his two brothers as well, felt so satisfying.
Kristy Marie's writing clicks with me, thanks to that bit of quirk mixed in with the humor and romance, and there's even a pinch of angst that brings a smile to my face. Ironic, I know. She's easily become a go-to author because her stories are appealing and once you start reading or listening, it's almost impossible to not become emotionally invested in her characters and their journey towards a happily-ever-after. Then there are narrators Heather Firth and Connor Crais, and I must say that I was quite impressed with Firth's performance here. She sounds exactly how I imagined Halle would. Crais also matches Firth perfectly, bringing Vance to life in a way that now, I couldn't imagine Vance sounding any other way. I don't think I could have spent eight hours with a better audiobook this weekend. Five stars for the writing, five stars for the narration, with an average rating of five stars for The Potter!
Date Listened to: 19 April 2022
Learn more about Kristy Marie.
Learn more about Heather Firth and Connor Crais.
Purchase The Potter on Audible.