Review: The Spring We Ignited by Victoria Denault (Ocean Pines #3) 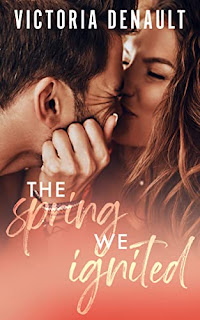 Note: An advance reader copy (ARC) was provided by the author.
Victoria Denault takes readers back to the small town of Ocean Pines with the release of the third book in the series that shares the same name. The Spring We Ignited is the story of love, friendship, and family, and Nova Escalara and Finn Hawkins are the main characters. Finn is the twin brother of Logan whose story was told in previous book, The Winter We Collided, and is the older brother of Terra whose book, The Fall We Fell, kicked off the Ocean Pines series. The oldest sibling, Declan, gets his own book in the fourth and final release, The Summer We Surrendered, but I'm getting ahead of myself here. This newest book is one that some may label "forbidden", but I think of it as complicated romance, but one that has all characters involved deserving of their happily-ever-afters.
Five years ago, Nova Escalara returned to the place where she worked in hopes of coming across Finn Hawkins and asking for his help. Instead, it's Finn's older brother who she finds at the Hawkins Lobster Shack. He offers to marry her, and she agrees. They both had their reasons, and their marriage was happy and there was denying they loved each other. Then Declan walked away, leaving Nova to face the endless questions from his family--the same family that made Nova feel like she was a part of them, even with her marriage coming to an end. When Finn offers to pretend to be her husband in order to take a much needed vacation that is originally for Mr. and Mrs. Hawkins, Nova agrees. Getting closer to Finn is risky because Nova has got secrets, and not all of them are hers.
Third time's the charm! Not that the first two books were not good reads; they were, but it's book number three that's my favorite (so far). It was clear from the get-go that any sort of relationship between Nova and Finn was going to come with complications post-separation from Declan. Figuring out what led Declan to leave his family and Ocean Pines wasn't difficult, but having an inkling as to his motivation did not take away from wanting to know if he would come back and how everything would be resolved with regards to Nova and Finn's relationship and Declan's own family ties if he did decide to return home. This had quite a bit of angst, but there were a lot of lighthearted moments to balance everything out quite nicely. Victoria Denault delivers a well-written and lovely five-star read with The Spring We Ignited. Now, the countdown begins for Declan's story!
-------------------------
Read my reviews for the Ocean Pines series: