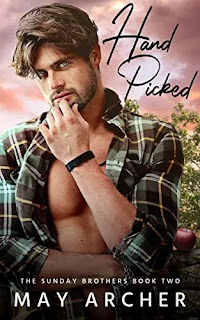 Note: An advance reader copy (ARC) was provided by the author.
We're back in Little Pippin Hollow with the release of the second novel in May Archer's Sunday Brothers series. Hand Picked is the story of Thomas Webb Sunday and Luke Guilford Williams, aka Webb and Sunday--neighbors, albeit not-so-friendly ones, but that's more on Webb than anyone else. Of course, Luke understands why the single father of a seven-year-old son, Aiden, wasn't too happy with him. That's what happens when you're Aiden's teacher and you hand off the boy to his estranged mother without the approval or knowledge of his father. Sigh. Apologizing hasn't gotten Luke very far, and it seems that the town's taken sides, and he being the outsider living in the historic house that was actually a decrepit structure he won in a contest made him the odd man out. And then one drunken night with some blowing--of the bugle variety--and vows--purely platonic, of course--exchanged, Aiden and Webb now find themselves betrothed ... to each other!
This book was a hoot! I loved the idea of two neighbors, one grumpy and none too happy with the other who happened to be sunshiny that wanted everyone around him to be happy, who end up tied together in the quirkiest way possible. Webb was very much a stubborn man, but I also understood why he was as peeved as he was about the whole thing regarding Aiden, although he was already a bit too harsh in his treatment of poor Luke. I liked that we see these two actually become friends before they become lovers and then more. It allows for a better appreciation of their relationship and the hope is stronger that they'll make it through to their happily-ever-after. One of my favorite things about small town romances is that we've got the nosy but well-meaning townspeople. Here, they're also matchmakers to boot, and add in Webb's family and welp, Webb and Luke never stood a chance. I'm giving Hand Picked five out of five stars. I can't wait for Hawk and Jack's story, which is next in the Sunday Brothers series, Cherry Picked!
Release Date: 11 April 2022
Date Read: 11 April 2022
Learn more about May Archer.
Purchase Hand Picked on Amazon.