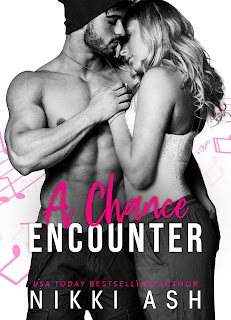 Note: An advance reader copy (ARC) was provided by the author via Enticing Journey Book Promotions.
A Chance Encounter is the newest book from bestselling author Nikki Ash, and it's a surprise pregnancy romance that pairs a single mother and a famous musician. This also kicks off Ash's Love & Lyrics series, with the rest of the books about a band and serving as a spin-off, but I digress! This series starter finds a girl named Sophie and a guy named Easton crossing paths thanks to one chance encounter (and a killer bee) that leads to one epic hook-up. They don't exchange anything more than their first names, which makes things a wee bit difficult when single mom and bartender Sophie Davis finds herself in the same situation she was in at eighteen, seven years ago. She has no idea that the guy she had that memorable time with is actually Easton Blackwood, world famous singer and songwriter. But when they find each other again, Easton is thrilled. He's thought about his "Dash" for weeks. Now, he's about to show her that he's nothing like the guy who came before in. He's ready to go all in, and he won't take anything to chance.
Who says a rock star has to be all broody and grumpy, not that I have anything against broody and grumpy rock stars in particular and main characters in general? Easton was a breath of fresh air, and I loved how dedicated he was once he realized the new situation that he and Sophie found themselves when they reconnected, and by reconnected, I don't mean back in bed, although we all know that happens in the story anyway. I absolutely understood why Sophie was as wary as she was, especially given that this isn't her first go-around. I appreciated her independence and tenacity, plus her love for her daughter, Kendall. Nikki Ash delivers a really sweet story with some original touches, and I'm excited to see what awaits readers in the other Love & Lyrics books. A Chance Encounter gets 4.5 stars.
Release Date: 21 April 2022
Date Read: 12 April 2022
Learn more about Nikki Ash.
Purchase A Chance Encounter on Amazon.